June Kreplin is 96 years old and one of the longest serving volunteers at Chicago’s O'Hare Airport.

CHICAGO - She was born around the time the first passenger airliner took flight. Now, she is pointing travelers in the right direction at O’Hare.

June Kreplin is 96 years old and one of the longest serving volunteers at Chicago’s main airport.

While most of us view the airport as a stressful experience, for decades, Kreplin has seen it as an opportunity to help.

Fifty years ago, Kreplin began her work as a traveler's aid volunteer at O’Hare Airport.

“I spent a lot of time with the Korean orphans. My daughter is an adopted child. My first encounter with it was a little bit hard because I know what they do. They have to give a child up,” Kreplin said. 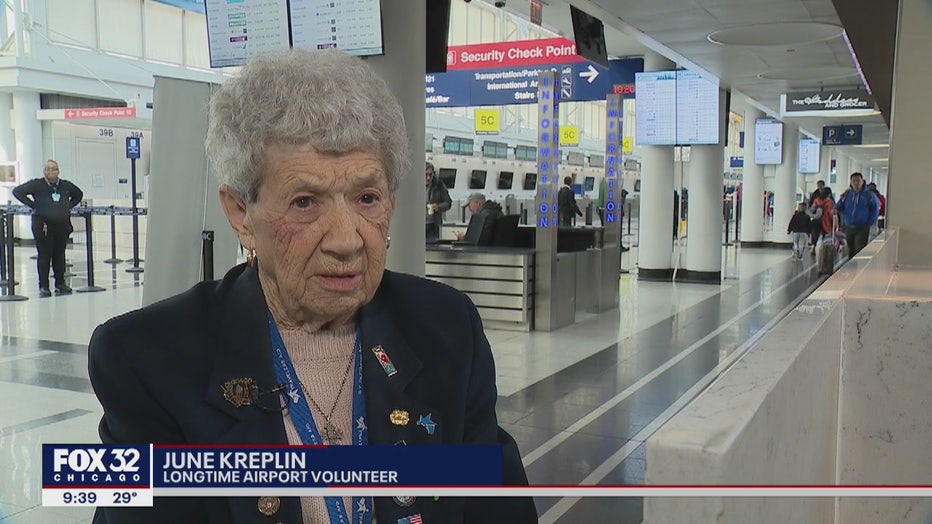 She says watching eager American parents meet their adopted Korean babies for the very first time was both the most difficult and rewarding part of her time at O’Hare.

“I did go to Korea to pick up some children. We brought six of them back with us. They usually had someone from their agency coming with them. We would sometimes have 25 children on the plane. We had a lot of them. That was my favorite,” she said.

Now a day, Kreplin still drives to O’Hare once a week, helping hundreds of travelers a day.

She is the volunteer with the longest tenure at O’Hare, and maybe that's why she's closing in on 100 years old.

“I do love it. I think everyone should have a volunteer job,” she said. “I think volunteering helps you navigate in life.”

Travelers Aid has over 160 volunteers throughout O’Hare. You can find Kreplin at the information desk in Terminal 5.