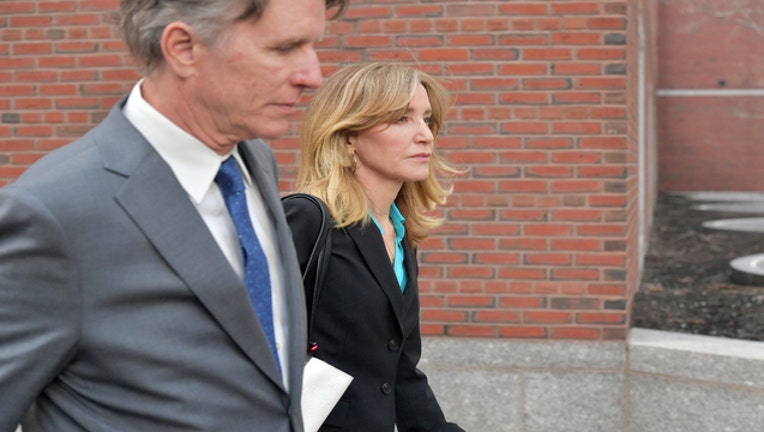 BOSTON - "Desperate Housewives" actress Felicity Huffman pleaded guilty in Boston today to a federal conspiracy charge for paying $15,000 to have a proctor correct her daughter's answers on a college-entrance exam.

During the hearing, prosecutors said they will recommend that Huffman which is one of dozens of parents ensnared in the nationwide admissions cheating scandal  serve four months in prison, pay a $20,000 fine and spend a year on supervised release after her prison time.

A sentencing date was not immediately announced. A judge will have the final say on what sentence Huffman actually receives.

Huffman's plea came two months after she was arrested in what's been called "Operation Varsity Blues," in which wealthy parents are accused of paying bribes to help their children get admitted into elite universities across the nation.

Huffman's husband, actor William H. Macy, was not charged in the scheme.

The 56-year-old Huffman is among 14 parents who agreed to plead guilty in what authorities have called the biggest college admissions cheating scandal ever prosecuted in the nation. Huffman pleaded guilty to a single count of conspiracy to commit mail fraud and honest services mail fraud for paying a proctor $15,000 to correct answers on her daughter Sophia Grace Macy's college- entrance exam.

According to prosecutors, Huffman paid the money to Newport Beach businessman William Rick Singer the admitted ringleader of the nationwide cheating operation. The money was disguised as a donation to Singer's charitable foundation, prosecutors said. In exchange, Singer paid a man to

proctor the SAT exam taken by Huffman's daughter and the children of several other clients, according to court documents. In Huffman's case, the proctor corrected her daughter's test answers, giving her a final score of 1420 -- 400 points better than she had previously scored on the PSAT exam, court records

Huffman issued a statement last month saying she is "in full acceptance of my guilt, and with deep regret and shame over what I have done, accept full responsibility for my actions and I will accept the consequences that stem from those actions."

"I am ashamed of the pain I have caused my daughter, my family, my friends, my colleagues and the educational community," she said. "I want to apologize to them and, especially, I want to apologize to the students who work hard every day to get into college, and to their parents who make tremendous sacrifices to support their children and do so honestly.

"My daughter knew absolutely nothing about my actions, and in my misguided and profoundly wrong way, I have betrayed her. This transgression toward her and the public I will carry for the rest of my life. My desire to help my daughter is no excuse to break the law or engage in dishonesty."

Also pleading guilty today was Los Angeles businessman Devin Sloane, who allegedly paid $250,000 to get his son into USC as a fake water polo recruit. Sloane, who founded a drinking and wastewater systems company, bought water polo gear online and worked with a graphic designer to create a fake

photo of his son playing the sport, according to prosecutors.

"Full House" actress Lori Loughlin and her fashion designer husband, Mossimo Giannulli, have pleaded not guilty to paying $500,000 in bribes to get their daughters into USC as crew recruits even though neither of them is a rower.

Federal prosecutors say Singer would bribe coaches at elite universities to have the children of wealthy parents admitted as athletic recruits, even though the students generally never participated in the sport for which they were listed as recruits.

CNS contributed to this story.