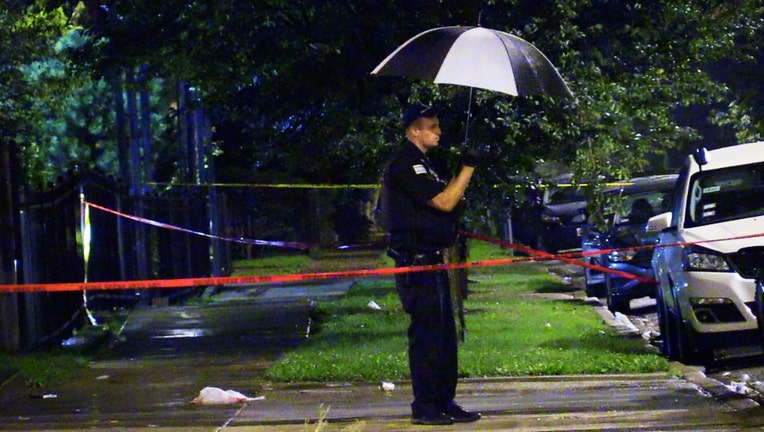 Police investigate the scene where 2 people where killed and another wounded, in the 0-100 block of E. 112th Pl, Sept. 22, 2019, in the Roseland neighborhood. | Justin Jackson/Sun-Times

CHICAGO - Ald. Anthony Beale (9th) called on city agencies Monday to shut down a Roseland barbershop where a concealed-carry holder and a would-be robber were killed over the weekend in a shoot-out.

Saturday’s incident was just the latest in a series of crimes at the Crispy Cuts barbershop, 31 E. 112th Pl., Beale said Monday in a statement. He asked for help from Chicago police and the Department of Business Affairs and Consumer Protection to have the shop closed.

“I have asked that the site be closed until the Chicago Police Department and BACP complete a thorough investigation into what the source of reason is for the unusual number of criminal activities at this one location,” Beale said.

Beale’s 9th Ward aldermanic office is located across the street from the barbershop.

On Sept. 21, Derrick Gholston, 43, was robbed at gunpoint by two men while standing outside of the barbershop, police and the Cook County medical examiner’s office said. After he complied, the two suspects entered the business and announced another robbery.

Gholston, a concealed-carry permit holder, pulled out his own gun and confronted the robbers, leading to an exchange of gunfire, authorities said. He and would-be robber, 18-year-old Carlos Smith, were each struck and taken to Christ Medical Center in Oak Lawn, both were pronounced dead within an hour of the shootout.

In addition to the shootout, Beale listed a host of other crimes committed at the barbershop over the last two years, including a robbery last June, two thefts in 2018, another theft in 2017 and a battery in Sept. 2017.

“Once the issues have been examined and resolved we can, as a community, decide how to proceed,” Beale said.