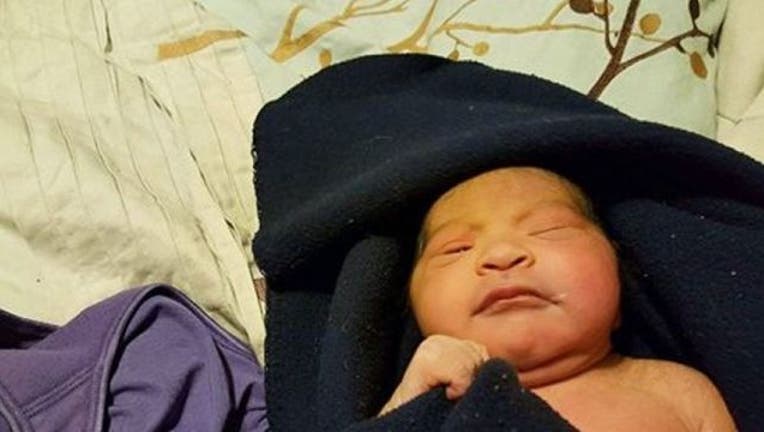 Photo provided by Roseanne McCulloh shows a baby girl in Mesa, Ariz. Police were searching Wednesday for the parents of the newborn baby girl who was left in front of the suburban Phoenix home, her umbilical cord still attached. (Roseanne McCulloh)

PHOENIX (AP) — Police were searching Wednesday for the parents of a newborn baby girl who was left in front of a suburban Phoenix home, her umbilical cord still attached.

"At this point, our detectives have kind of exhausted all of our initial possible leads that we had," Mesa police spokesman Steve Berry said at a news conference. "We have had no success in locating either Mom or Dad for this child."

The 7-pound-8-ounce infant remained hospitalized, but doctors said she appeared to be healthy. Police estimate she was hours old when she was found, Berry said.

James and Roseanne McCulloh said their son spotted a baby carrier on top of an irrigation box Tuesday morning while he was standing on the front porch. He then gently removed a metal panel that was on top of it.

"I saw him jump 20 feet, and he said 'There's a baby in it,' " Roseanne McCulloh said. "I ran over there. She wasn't blue. I touched her little arm, and I opened up the blanket. She was just beautiful."

The girl was wrapped in a blanket, but there was nothing else in the carrier. The couple brought her inside and called 911. Roseanne McCulloh warmed up a blanket in the microwave while her husband wiped the baby down. Emergency responders showed up and transported the girl to the hospital.

Roseanne McCulloh said she believes the baby was left there around 2 a.m. She said her daughter recalls hearing noise from their irrigation box through her bedroom window around that time.

Mesa police are asking anyone who may have been in the area Tuesday morning to come forward, Berry said. Investigators want to speak with anyone who remembers seeing a woman or a vehicle or anything suspicious. As of Wednesday afternoon, police hadn't received any calls with possible new leads since holding the news conference.

Investigators do not believe the mother gave birth at any hospital. Berry said no medical facility would have let an infant leave with "a full umbilical cord attached."

Arizona has a Safe Haven Law that allows a person to leave a newborn at certain locations such as fire stations, hospitals and churches without fear of criminal prosecution. Police are wondering why the parents essentially left the baby on the sidewalk when there is a fire station about half a mile away, Berry said.

"Fortunately, the homeowner did happen to come out to the house and discovered the baby," he said.

The infant, who police are calling "Baby Jane," is described as either Hispanic or Native American with black hair.

If nobody claims the baby, she will be put into the custody of the Arizona Department of Child Safety and likely placed in a foster home.