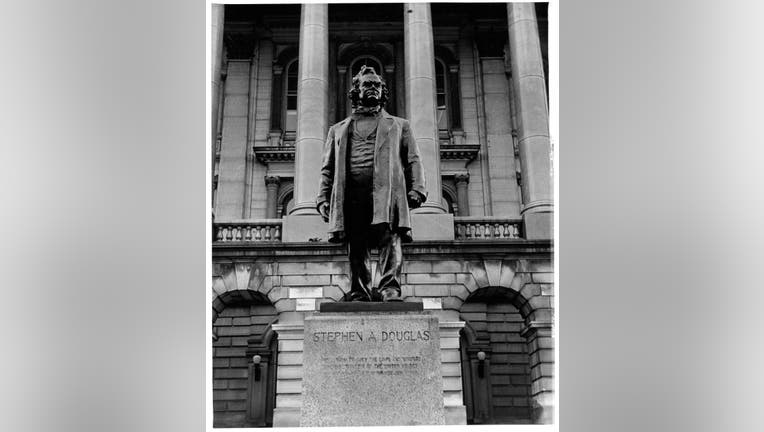 A view of the statue of American politician, Stephen Douglas outside the State Capital in Springfield, Illinois. (Photo by Lawrence Thornton/Archive Photos/Getty Images)

SPRINGFIELD, Ill. - With the nation racing to come to grips with centuries of racial sins, officials plan to remove the Capitol lawn statue of Stephen A. Douglas, whose forceful 19th century politics helped forge modern-day Illinois but who also profited from slavery.

Just inside the Statehouse hangs another revered depiction of an Illinois legend -- and longtime Douglas rival -- who expressed white supremacist views: Abraham Lincoln. The immense painting in the governor's second-floor office depicts a Sept. 18, 1858, debate between the two men that opened with these words from Lincoln, who was vying for Douglas' Senate seat and was still two years away from running for president:

When  the Douglas statue is put in storage this fall, it will become the latest in a line of monuments, from Confederate generals to Christopher Columbus, to come down during the global reckoning on race sparked by the May 25 death of George Floyd in Minneapolis police custody. There has been no discussion, though, about removing likenesses of Lincoln, the president whose Civil War victory freed the slaves, despite his earlier views on race.

"At a certain point, where do you cut it off? Jefferson, he wrote the Declaration of Independence. You separate that from him being a slave owner," St. Louis tourist Eric Zuelke said during a recent visit to the Douglas statue, referring to Thomas Jefferson.

DOUGLAS PARK COULD BE RENAMED FOR DOUGLASS

Lincoln believed that slavery was morally wrong and, like Douglas, he opposed it, although the two differed on how to end it. While his thinking evolved in the White House, Lincoln's advocacy for Black people in 1858 stopped at recognizing their natural rights under the Declaration of Independence that "all men are created equal," though his was still a radical position for the time.

Douglas' contributions to the modern-day Illinois economy and transportation network cannot be overstated. But he retained a 20% share of a family-owned  200-slave Mississippi plantation, a little-known fact that led Illinois' House speaker in July to recommend removing Douglas' likenesses from the Statehouse.

On the day in the eastern Illinois city of Charleston depicted in Robert Root's 1918 painting -- the fourth of seven celebrated debates around the state that helped make Lincoln a national figure -- Lincoln felt pressured to respond to Douglas' repeated taunts of Lincoln as a "Black Republican" who stood for "Negro equality."

Teresa Haley, who heads the Springfield branch of the nation's oldest civil rights group, the NAACP, said she thinks the Douglas statue should be removed to show intolerance for racism and white supremacy. Although Lincoln also had racist views, he was a president and the one who freed the slaves, she said.

"There's something about erasing things from history that we still need to be aware of," Haley said. "But there's also something about glorifying that negative part of history as well. And this is the part that hurts all people."

Lincoln isn't blameless on race off the debate stage.

Allen Guelzo, a Princeton University scholar and three-time Lincoln Prize winner, noted that in 1847, Lincoln unsuccessfully represented slave owner Robert Matson in court to retrieve fugitive slaves in a free state from among those Matson rotated between his land in Kentucky and eastern Illinois to skirt Illinois' anti-slavery law.

Guelzo, who co-created a five-step decision-making analysis for the removal of newly scrutinized memorials, believes that if Illinois uproots Douglas, Lincoln should follow, disqualified by the Matson case and his stance during the Charleston debate.

If an offensive racial opinion "is the only yardstick that we use to measure people today, they will have to pull down monuments to everybody from before 1950," Guelzo said.

Complicating matters is the idea that without Douglas, there might never have been a Great Emancipator. Douglas' position that territorial voters in an expanding country should decide whether to allow slavery incensed Lincoln, luring the former congressman out of political retirement to challenge Douglas. Each of the 1858 debate sites, from Freeport to Jonesboro, memorializes the men -- most with full-size statues.

"Dismantling those or taking down just Douglas would sort of erase one of the most important political discussions ever held in the country," said Harold Holzer, another Lincoln Prize winner and Civil War expert at Hunter College in New York. Holzer said Mary Lincoln, who prodded her husband to greatness, and Douglas "are the two best things that happened to Lincoln."

Jim Edgar, who requisitioned Root's painting for his office when he was Illinois secretary of state and had it moved to its current location for his 1991-1999 tenure as governor, said that like most politicians seeking to remain viable, Lincoln felt the need to "play to the crowd" in Charleston.

"When I was campaigning, you never wanted to say something you didn't believe, or say something that later you're going to deny, but at the same time, you understand that you've got to get elected to get something done," said Edgar, a Republican from Charleston.

He pointed out that despite the ugly stance Lincoln took that day, he clung to the notion that Black people were among those who were "created equal" according to the Declaration of Independence. It was a radical view for the time that continued to evolve until, by war's end, Lincoln embraced citizenship for Black people.

As for Douglas, after he lost the presidency to Lincoln in 1860, he emerged a staunch Unionist and Lincoln ally, said Guelzo, adding that his dying words to his sons in 1861 were, "Tell them to obey the laws and the Constitution."

Those words are inscribed on the base of the Statehouse statue.