Christmas came early for animals staying at Dogs Trust Irelands Rehoming Center in Dublin as staff let the canines choose from an array of Christmas gifts donated by staff and supporters.

LOS ANGELES - Ben & Jerry’s is extending its ice cream offerings to another species.

The Vermont-based company announced Monday that it has launched Doggie Desserts, a specialty line of ice cream that is made for man’s best friend.

Doggie Desserts are made in 4-ounce mini-sized cups and are filled with ice cream that’s been formulated to be safe for dogs, according to a Ben & Jerry’s FAQ webpage.

The ice cream is reportedly churned with "very limited amounts of dairy" and are sunflower butter-based. Each cup is blended with signature Ben & Jerry’s flavors that are found in the company's human versions, which also makes Doggie Desserts safe for people to try as well if they’re bold enough to sample.

So far, there are two flavors of Doggie Desserts available for purchase. There is a peanut butter and pretzel swirl blend known as Pontch’s Mix and a pumpkin and mini cookies blend known as Rosie’s Batch.

According to the American Kennel Club, most dogs can have cow milk as a treat in "small quantities" but there is also a chance that some can be lactose intolerant.

Ben & Jerry’s isn’t the only company making frozen desserts for dogs. In recent years pet-focused brands such as Frosty Paws, Pooch Creamery and Dogsters have gained popularity for their specialty dog ice creams.

Even segments of the restaurant industry have jumped on the growing trend with dedicated frozen treats dog owners can buy for their furry friend. Some of the most popular would have to be Starbucks’ unofficial Puppuccino and Shake Shack’s Pooch-ini. 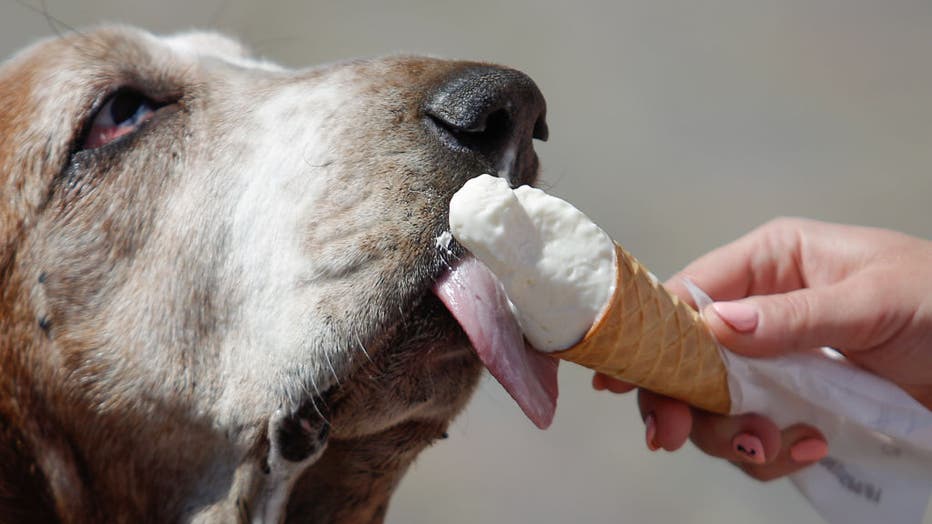 A woman is seen feeding vanilla ice cream to her dog.

Meanwhile, restaurants that are dedicated to both humans and dogs like Mutts Canine Cantina and The Watering Bowl have been gaining popularity as well due to their hybrid quick-service restaurant and dog park concepts.

In recent years, people have been spending more on their pets. A report from dog-boarding website Rover.com estimated that dog owners spent between $650 and $2,115 to care for a dog in 2020.

At the same time, market research data from Grand View Research forecasts that the pet food market will grow to $90.4 billion. Dog food is shown to make up the majority of the market share, according to the firm’s findings.