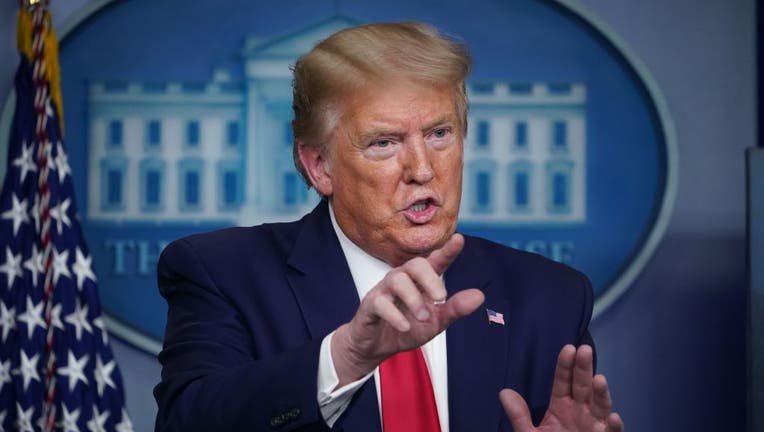 US President Donald Trump answers questions from reporters during the daily briefing on the novel coronavirus, COVID-19, in the Brady Briefing Room of the White House in Washington, DC on April 20, 2020. (Photo by MANDEL NGAN / AFP) (Photo by MANDEL

CHICAGO - A sharply worded ruling by a federal appeals court in Chicago on Thursday said the Trump administration policy of threatening to withhold grant money from so-called sanctuary cities to force them to comply with its more stringent immigration policies violates separation-of-powers provisions enshrined in the U.S. Constitution.

The 7th U.S. Circuit Court of Appeals also said a freeze of that policy should extend nationwide, rejecting arguments by U.S. Department of Justice lawyers that if an injunction were OKed in the case it should only apply to the city of Chicago.

Broad executive-branch powers on immigration matters don’t include withholding money allocated by the legislative branch to pressure cities and states to comply with an executive-branch policy, said Judge Ilana Rovner, who authored the 95-page ruling.

“Such a concentration of power,” she said, “would allow tyranny to flourish, and our system of government is wisely set up by the Founders to foreclose such a danger.”

She added: “The separation of powers is a foundation of our government, not a formality to be swept aside on the path to achieving goals that the executive branch deems worthy. … The (grant) conditions imposed here are an executive usurpation of the power of the purse.”

One of the three judges on the panel, Daniel Manion, concurred with the bulk of the ruling. But he said in a separate opinion that he disagreed with approval of a nationwide injunction, saying that “broad, sweeping relief of such nature is rarely appropriate.”

Congress established the main grant at issue, called a Byrne JAG grant, to help local law enforcement buy equipment, including body cameras and bulletproof vests. But Judge Rovner wrote that the Trump administration was wielding the grant “as a hammer to further a completely different policy of the executive branch — presenting a city such as Chicago with the stark choice of forfeiting the funds or undermining its own law enforcement effectiveness.”

Chicago Mayor Lori Lightfoot described being thrilled by the ruling in the litigation that stretches back to Donald Trump’s first year as president.

“When I got the news from our corporation counsel earlier this morning, I let out a cheer,” Lightfoot told reporters. She added: “This is a great victory, not only for Chicago, but for our immigrant and refugee communities everywhere in the country.”

Then-Chicago Mayor Rahm Emanuel initiated the legal action in 2017 against the U.S. Department of Justice, which oversees the grants, over the tying of grants to compliance with U.S. immigration law as the Trump administration wants it enforced.

Other cities who opted to similarly limit their cooperation with federal immigration agents also filed lawsuits against the department. Several cases are still playing out around the country.

Jeff Sessions was U.S. attorney general when Chicago sued in 2017, decrying what he called in the wake of the lawsuit what he called “open hostility” to enforcing immigration laws. His successor, William Barr, has defended the administration policy just as vigorously.

The suit focused on conditions on Chicago and other cities for grants, which included that they share immigration-status records with U.S. agencies and provide federal agents unfettered access to jails that might hold immigrants without proper documentation.

A Justice Department spokesman declined comment Thursday. The department would have the option of appealing the 7th Circuit decision to the U.S. Supreme Court. Lightfoot said the city “will be right there with them” if the department goes to the nation’s highest court.

Chicago’s sanctuary policies date back to the mid-1980s and successive city councils have confirmed or expanded the protections.

The city has prohibited police from providing federal immigration and customs officials access to people in police custody, unless they are wanted on a criminal warrant or have serious criminal convictions. Local police are also barred from allowing the federal agents use their facilities for interviews or investigations and from responding to agency inquiries about a person’s custody status or release date.