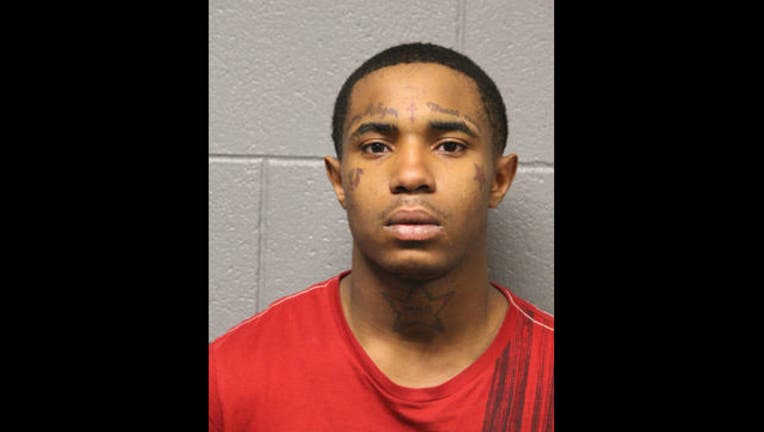 CHICAGO (Sun-Times Media Wire) - A purported gang member followed a woman visiting from Ukraine off a CTA bus and attacked her as she went into the West Town building she was staying in during her visit, Cook County prosecutors said Thursday.

Ledarius Johnson, who has face tattoos that read “True to my religion” and “Trust none” allegedly came up from behind the 47-year-old woman Monday night, grabbed her by the hair and forced her inside the foyer, the Chicago Sun-Times is reporting.

Johnson was caught after a couple upstairs who were preparing their children–ages 3 and 6–for bed heard the commotion. The wife called 911 while the husband, still in his work clothes, chased after Johnson outside and pointed him out to police. “I wanted to make sure he didn’t get away with it,” the 33-year-old IT specialist told the Sun-Times.

Minutes before 8 p.m. on Monday, Johnson and his victim had gotten off the same stop after getting off the No. 66 Chicago Avenue bus, Assistant Cook County State’s Attorney Lesley Gool said.

During the attack, in which 18-year-old Johnson allegedly pushed the woman, causing her to fall down the stairs, the victim cried out for help in Ukrainian.

Johnson covered the woman’s mouth with one hand while using his other hand to squeeze her groin over her pants, Gool said.

As the woman yelled out, Johnson squeezed her neck so hard, she almost passed out, Gool said.

Johnson then reached inside the woman’s pants and touched her genitals over her underwear, Gool said.

The woman tried to give Johnson her cellphone and purse but he refused to take them and kept touching her, Gool said.

The good Samaritan said because the woman was screaming in a foreign language, he initially wasn’t sure if she was arguing with someone she knew.

But then the wails got louder. From the third floor, the man saw the victim lying on her back on the stairs with Johnson on top of her with his hands over his mouth, Gool said.

“Adrenaline pumping,” the man said he chased Johnson down Chicago Avenue into an alleyway. During the pursuit, he said Johnson told him he had a gun.

The good Samaritan said when officers arrived, he was able to point Johnson out.

Police found Johnson hiding on a porch in the 800 block of Fairfield, Gool said.

Johnson, who was captured on CTA surveillance cameras wearing the same green coat and red sweatshirt he had on at the time of his arrest, was identified by the victim and witness, Gool said.

The woman suffered cuts to her faces and bruising on her legs and neck.

She had been in town to visit her Chicago-based cousin for a few weeks.

“How ya doing? How ya doing? Good afternoon,” Johnson said cheerily in court Thursday before Judge Donald Panarese Jr. ordered him held in lieu of $500,000 bail for criminal sexual abuse.

Johnson, of the 5700 block of West Erie, is a member of the Four Corner Hustlers street gang, according to a police report.

He was found delinquent as a juvenile in a robbery case in 2011.

Johnson is currently attending Malcolm X college where he is working toward his GED, an assistant public defender said.