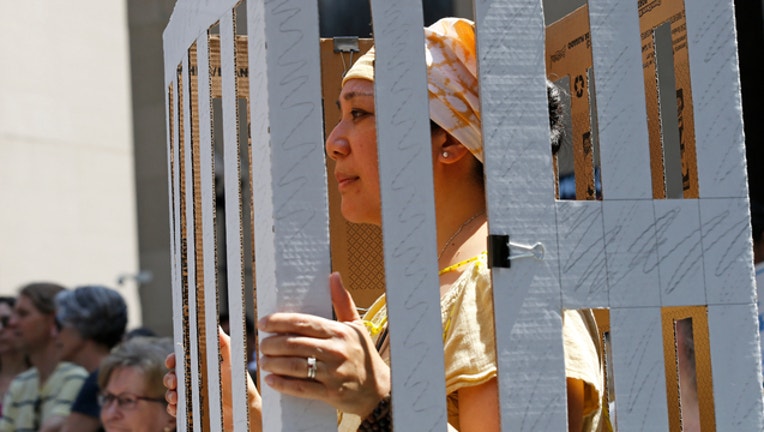 Mary Grace Bertulfo stands inside her cage made out of cardboard during a rally in Daley Plaza and then marched on July 13, 2019 in Chicago, Illinois. (Photo by Nuccio DiNuzzo/Getty Images)

A Chicago priest talked during his homily about the compassion of a border activist accused of harboring illegal immigrants, while another city church advertised a "deportation defense workshop." Dozens of Houston churches offered sanctuary to anyone afraid of being arrested. In Miami, activists handed out fliers outside churches to help immigrants know their rights in case of an arrest.

"We're living in a time where the law may permit the government to do certain things but that doesn't necessarily make it right," said the Rev. John Celichowski of St. Clare de Montefalco Parish in Chicago. His nearly 1,000-member congregation is 90 percent Hispanic and mostly immigrant.

Activists and city officials reported some U.S. Immigration and Customs Enforcement activity in New York and Houston a day earlier, but it was unclear if it was part of the same operation. An ICE spokesman didn't return a request for comment Sunday.

The renewed threat of mass deportations has put immigrant communities even more on edge since Trump took office on a pledge to deport millions living in the country illegally.

In Los Angeles, the Rev. Fred Morris looked out over his congregation at the North Hills United Methodist Hispanic Mission and was relieved to see everyone who usually attends the early Sunday morning service. He had been worried many would stay home, fearing Trump's threat of immigration sweeps.

"Everybody is nervous," Morris said. "They are angry, very angry at being terrorized by our president."