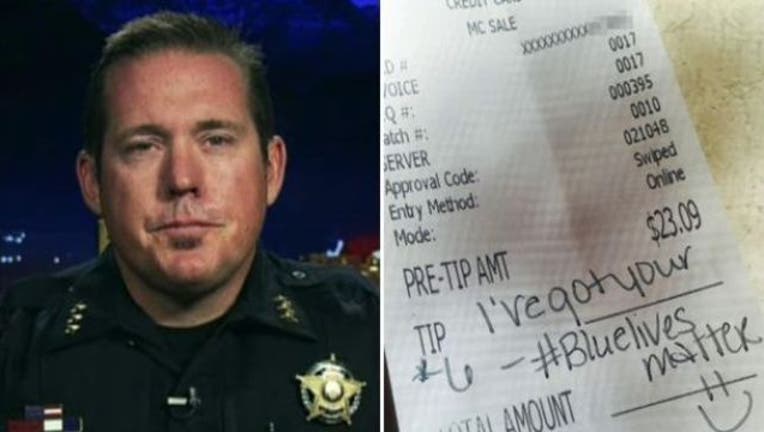 A Colorado sheriff got more than a free lunch after a customer at a local diner paid for his meal and wrote a message of support on his receipt that said “#Blue Lives Matter.”

Elbert County Sheriff Shayne Heap ordered his usual at Catalina’s Diner in Elizabeth: a Blue Cheese Bacon Burger. But when he got his bill he noticed the tab was paid and that there was a note on the receipt that said, “I got your #6.  #Blue Lives Matter.” — “I got your #6” is military jargon that means “I’ve got your back.”

“I asked the waitress when she dropped off the bill who paid for the meal.  And she just shrugged her shoulders and shook her head, and she wouldn’t tell me,” Heap told Fox & Friends.“I don’t think it had anything with me being a sheriff, it had to do with the uniform.”

The gesture comes amid growing national anti-police rhetoric spearheaded by the Black Lives Matter movement, which advocates for police violence. Heap said he's seen an overwhelming show of support for local police that includes people installing blue lights on front porches, putting blue tape on cars and sending a flood of thank you cards and cookies to police stations.