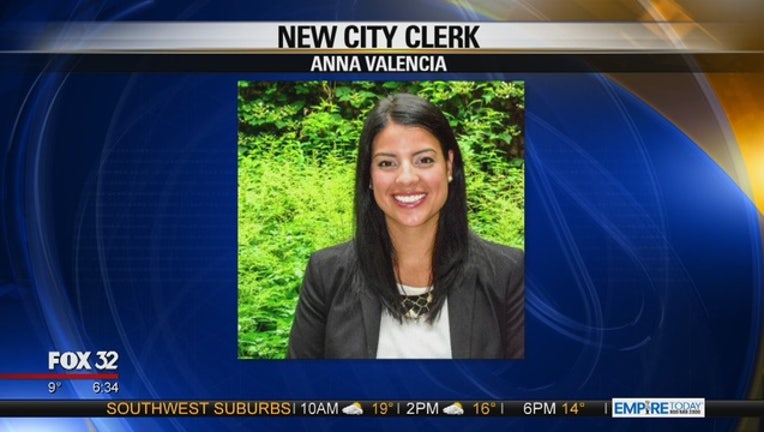 CHICAGO (AP) -- Chicago Mayor Rahm Emanuel on Wednesday appointed a 31-year-old director in his administration as the next city clerk after former Clerk Susana Mendoza was sworn in as Illinois comptroller this month.

Anna Valencia has been director of the mayor's Office of Legislative Counsel and Government Affairs. Her clerk appointment is subject to City Council approval, but she'll begin the job in the interim, according to city officials.

The clerk oversees records for the city, including the City Council's official legislative files. Most city residents interact with the clerk's office when applying for parking permits or vehicle stickers.

"Anna has proven herself as the next generation of leadership," Emanuel said of Valencia, who is the daughter of a Mexican immigrant. "For parents of immigrants, in Chicago and around the country, Anna is proof the struggle and sacrifice is worth it."

Valencia called the new job an honor, saying in a statement that she looks forward to building on the "commonsense reforms" of her predecessor. That includes implementing and expanding the new municipal identification program, which will be available to all city residents regardless of immigration status.

"Anna has proven herself as the next generation of leadership," Emanuel said in a statement. "For parents of immigrants, in Chicago and around the country, Anna is proof the struggle and sacrifice is worth it."

Mendoza, who was elected to a second clerk term in 2015, won the state comptroller job over Republican incumbent Leslie Munger in a special election last month. The four-year post was open midterm because of the vacancy left by Judy Baar Topinka's death. The Republican died shortly after her 2014 re-election. Republican Gov. Bruce Rauner named Munger, a former business executive, as Topinka's replacement but the appointment expired.