A suburban father is counting on his faith after his son was kidnapped in the Middle East.

LOMBARD, Ill. - A suburban Chicago father is counting on his faith after his son was kidnapped in the Middle East.

The city of Lombard is praying for the safe rescue and return of Mark Frerichs, who was kidnapped this past Friday in Afghanistan in the southeast province of Khost.

We spoke to Mark's father Thursday in a FOX 32 News exclusive.

“He is a great guy. I love him. I hope everything works out. I'm not real happy about this. Emotionally, it's been very upsetting,” said Art Frerichs. 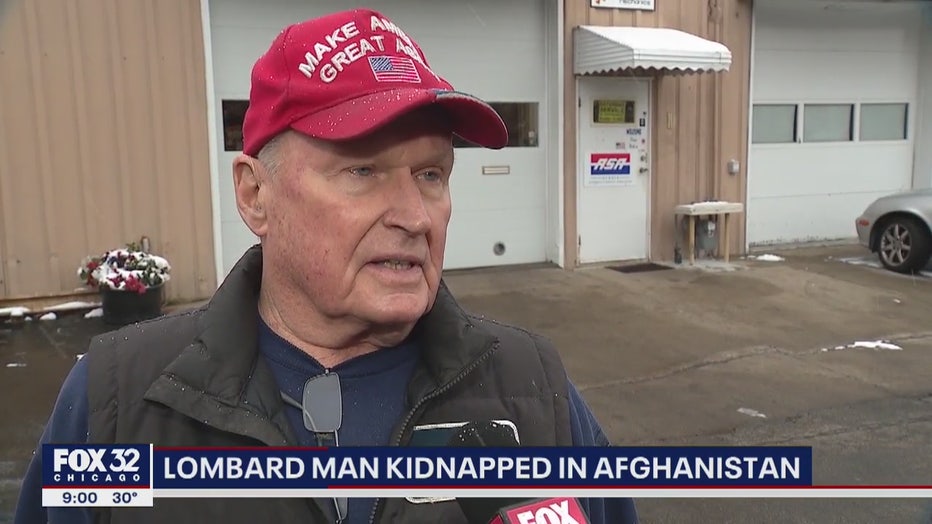 Art, who has run an auto mechanic shop in Lombard for decades, is right now praying for the safe return of his 57-year-old son, Mark.

“Obviously, I'm very upset my son is in this situation,” Art said. “But I have very much faith in God, my country, President Trump and the FBI that they will get the best thing that can possibly happen out of the situation.”

According to Mark’s LinkedIn page, he's a civil engineer and managing director of a company called International Logistical Support, who, over the last 10 years, has worked in several military conflict zones in the Middle East and Africa.

Mark graduated from Glenbard East High School before serving as a deep diver in the U.S. Navy, according to Newsweek.

“He's kind of like a MacGyver kind of a guy. He can be like an engineer or mechanical -- figure outs things to do and if he's in a tough situation, I'm sure he can do whatever it takes to try to get out of it,” said Art’s neighbor Jim Robbins. “So I wish him nothing but the best.”

U.S. officials told Newsweek they believe the Haqqani Network, a group aligned with the Taliban, may be responsible for the kidnapping.

It still is not clear how Mark was kidnapped. So far, no one has stepped forward to claim responsibility.

American forces have launched a ground-and-intelligence-gathering mission over the past few days to try to locate Mark. The search in part has been hindered by severe winter weather, which has prevented overhead drone surveillance and made it difficult to navigate the terrain.