CHICAGO - On Thursday, Brendan Sullivan read from a letter titled, "The Elephant in the Room." He wrote it after his son Charlie died suddenly after taking cocaine that had been laced with fentanyl.

Now, that warning to other parents has been shared tens of thousands of times on Facebook.

The pain is still fresh and raw for Brendan and Susan.

"If any of his friends needed to talk to someone.... Charlie was the guy,” Brendan said.

Charlie, 23, was an urban planning student at UIC, a social activist and a musician.

"When he was on stage he just lit up the place,” Brendan said.

"And he had something to say with his music,” Susan added.

But on February 1, Charlie died in his Ukrainian Village apartment after taking a hit of cocaine that had unknowingly been laced with fentanyl -- a powerful and cheap narcotic used by drug dealers to save money.

"It is being put into marijuana and heroin and many other things. And it is dangerous because only a tiny, tiny little bit can kill you. Especially if you don't even know it's in there,” Susan said.

"Charlie was not an addict,” Brendan said.

"And maybe he had done it before, we don't know,” Susan said. 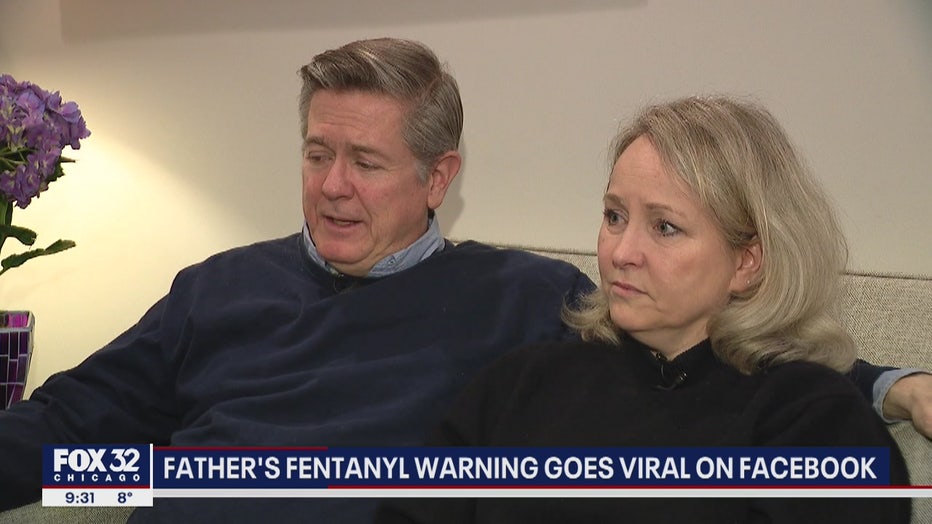 With hundreds of stunned friends attending Charlie’s wake and funeral, his parents decided to directly address the "Elephant in the Room” -- giving each mourner a copy of a letter written by Brendan.

"In 2019, more people in Cook County died of a fentanyl overdose, 789, than were killed by guns, 580. This is a cruel epidemic which we fear does not get the attention and outrage it deserves because its victims are using an illegal drug so 'they should have known better.' Our son did not take his own life deliberately, and he was not an addict. He was a young man who made one bad decision last week,” Brendan read at Charlie’s service.

"The Elephant in the Room" made its way to Facebook and has now been shared tens of thousands of times, with reaction coming from all over the country.

"When I wrote it, there's a reason I put 'our son' instead of his name. Because I wanted it to be universal. And I wanted other people to be able to share it and not have to think this was one kid somewhere. Our son means it could be your son,” Brendan said.

Charlie is gone, but they hope his tragedy may prevent others.