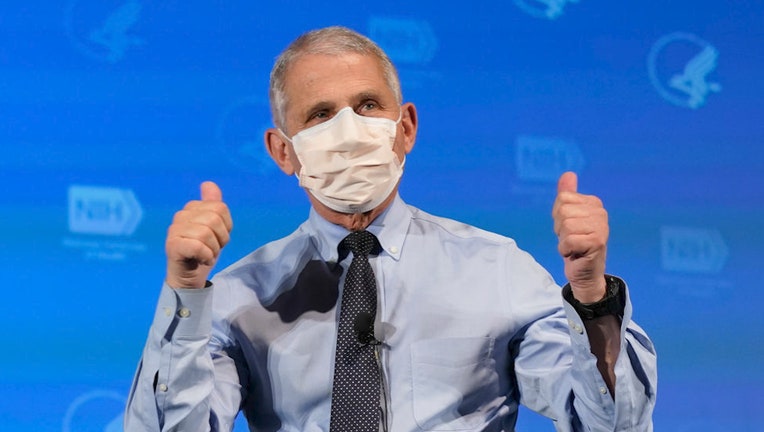 The U.S. ramped up COVID-19 vaccinations in the past few days after a slower-than-expected start, bringing to 4 million the number of Americans who have received shots, Dr. Anthony Fauci said Sunday.

The government’s top infectious-disease expert also said on ABC’s "This Week" that President-elect Joe Biden’s pledge to administer 100 million shots of the vaccine within his first 100 days in office is achievable.

And he rejected President Donald Trump’s false claim on Twitter that coronavirus deaths and cases in the U.S. have been greatly exaggerated.

Dr. Anthony Fauci received the first dose of the Moderna COVID-19 vaccine on Dec. 22, stating he hopes it serves as a symbol to Americans about the shot's safety and efficacy.

"All you need to do ... is go into the trenches, go into the hospitals, go into the intensive care units and see what is happening. Those are real numbers, real people and real deaths," Fauci said on NBC’s "Meet the Press."

The U.S. death toll has climbed past 350,000, the most of any country, according to data compiled by Johns Hopkins University, while more than 20 million people nationwide have been infected. States have reported record numbers of cases over the past few days, and funeral homes in Southern California are being inundated with bodies.

Los Angeles Mayor Eric Garcetti said the pandemic is getting worse in his city as the virus spreads rapidly within households and people let their guard down with news of a vaccine’s arrival. "This is a virus that preys off of our weakness, preys off of our exhaustion," he said on CBS’ "Face the Nation

Experts believe the real numbers of deaths and infections are much higher and that many cases were overlooked, in part because of insufficient testing.

Fauci said he has seen "some little glimmer of hope" after 1.5 million doses were administered in the previous 72 hours, a strong increase in vaccinations. He said that brings the total to about 4 million.

But he acknowledged the U.S. is well short of its goal of having 20 million people vaccinated by the end of 2020.

"There have been a couple of glitches. That’s understandable," Fauci said. "We are not where we want to be, there’s no doubt about that."

Dr. Moncef Slaoui, the chief science adviser to Operation Warp Speed, the government’s vaccine development and distribution effort, told CBS that 17.5 million doses have been shipped. About 13 million of those have been distributed to clinics, hospitals and other places where they will be administered, according to Fauci.

The 20 million-dose goal hasn’t been reached in part because local health departments and medical facilities had to stay focused on testing to handle a surge in cases, U.S. Surgeon General Jerome Adams said. And the holiday season meant health workers were taking time off, he said.

"I don’t want anyone to think I’m being Pollyannish here. There’s what we delivered, and we hope that those will be translated into vaccinations. That has not occurred to the way that we would like," Adams said on CNN’s "State of the Union."

On Sunday morning, Trump falsely tweeted that the outbreak has been "far exaggerated" because of the Centers for Disease Control and Prevention’s "ridiculous" methodology. He complained too that Fauci has been credited by the media with doing "an incredible job" when Fauci "works for me and the Trump administration, and I am in no way given any credit for my work."

Fauci and others are warning that an additional surge is likely because of holiday gatherings and the cold weather keeping people indoors.

"It could and likely will get worse in the next couple of weeks, or at least maintain this very terribly high level of infections and deaths that we’re seeing," Fauci said.

Arizona on Sunday reported a one-day record of more than 17,200 new cases, eclipsing the previous mark of about 12,000 set in early December. Health officials said the jump appears to reflect infections from Christmas gatherings but was also probably inflated by a reporting lag over New Year’s weekend.

North Carolina and Texas reported record numbers of people in the hospital with COVID-19 — nearly 3,600 and over 12,500, respectively..

Overseas, British Prime Minister Boris Johnson said more onerous lockdown restrictions in England are likely as a variant of the coronavirus has pushed infection rates to their highest levels on record. More than 50,000 new infections have been reported daily over the past six days.

Scientists have said the variant is up to 70% more contagious. While Fauci said the U.S. needs to do its own study, he noted that British researchers believe that the mutated version is no deadlier or more likely to make people sicker and that vaccines are effective against it.

But Scott Gottlieb, a former U.S. Food and Drug Administration commissioner who serves on the board of vaccine maker Pfizer, said on "Face the Nation" that the variant "really creates more urgency around trying to get this vaccine out more quickly and get more people vaccinated."