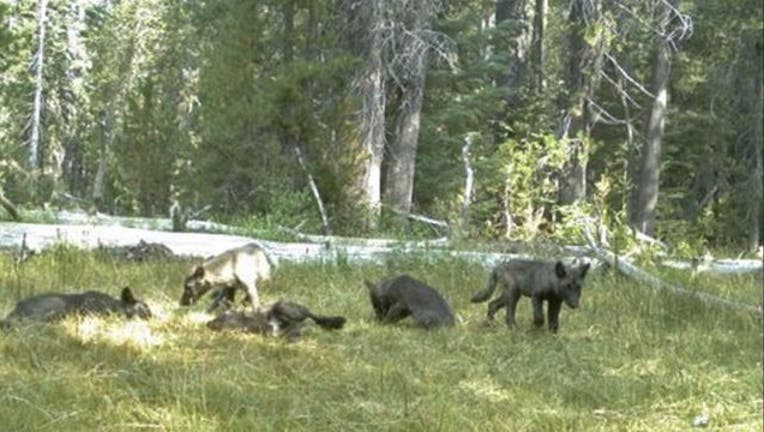 Aug. 9, 2015: image from video released by the California Dept. of Fish and Wildlife shows evidence of five gray wolf pups and two adults in Northern California.

(AP) - California has its first wolf pack since the state's gray wolf population went extinct in 1924.

They were named the Shasta pack for nearby Mount Shasta.

Karen Kovacs of the California Department of Fish and Wildlife said it was an amazing accomplishment for gray wolves to establish themselves in Northern California just 21 years after wolves were reintroduced in the Northern Rockies.

Those wolves eventually migrated into Oregon and Washington before reaching California, where they are protected by federal and state endangered species acts.

Just where these wolves, all black in color, came from will have to wait for DNA testing on scat at an Idaho lab, but it is likely they are a continuation of the increasing numbers of wolves migrating from Oregon's northeastern corner to the southern Cascade Range, Kovacs said.

Though the wolves have been spotted by local ranchers tending their herds, there have been no reports of wolf attacks on livestock, Kovacs said.

Kirk Wilbur, government affairs director for the California Stockmens Association, said ranchers remain worried about the potential for losing animals to wolves as their numbers increase.

Amaroq Weiss, of the conservation group with Center for Biological Diversity, said she was more worried the wolves could fall victim to hunters as hunting season gets underway.

Anticipating that wolves would migrate into the state, California declared them an endangered species last year, but the state Fish and Wildlife Department does not expect to have a management plan in force until the end of this year, Kovacs said.

The department has no goals for how many wolves might eventually live in California and no idea how many once lived in the state, she added. California's last known native wolf was killed in 1924 in neighboring Lassen County.

There are at least 5,500 gray wolves in the contiguous 48 states, according to the U.S. Fish and Wildlife Service.