CHICAGO - A former FBI Investigator said on Monday that the situation surrounding the shooting outside Chicago at a July 4th parade suggests there was pre-planning involved.

"Well, it does start to at least suggest is that this person had you know, there's pre-planning involved. Perhaps it's someone who had access to one of those buildings or knew the buildings and knew the vantage point," former FBI Investigator Bill Daly told "America Reports."

Multiple people are feared dead after a reported shooting at a 4th of July parade in Highland Park, Illinois, on Monday.

Witnesses say crowds fled the sound of gunfire, and others saw at least five bloodied people lying on the ground and another under a blanket, according to the Chicago Sun Times.

Daly explained further that assuming that the information about how the shooter fired at victims is correct, the perpetrator likely canvassed the area before the mass shooting.

New video shows the moment a gunman opened fire on a crowd of people at a Fourth of July parade in Highland Park, Illinois on Monday morning.

"If this is what we're hearing is correct, again, and we'd like to caution as we do this situation, and therefore, that may not be completely accurate information, but understanding that if there was a higher vantage point, whether it be a rooftop or out of a window, would mean that person would have perhaps done some type of canvasing," Daly said.

"And knowing the area, knowing how to get up there undetected and also looking for one where they would be able to kind of take that that kind of surprise element and cascade that down on their victims, unfortunately."

The number of victims remains unclear. Police have reportedly requested a canine unit to assist in finding the suspect. The suspect remains at large.

Illinois Gov. JB Pritzker stated that he believed there were at least nine shooting victims. At least six were killed, according to law enforcement. 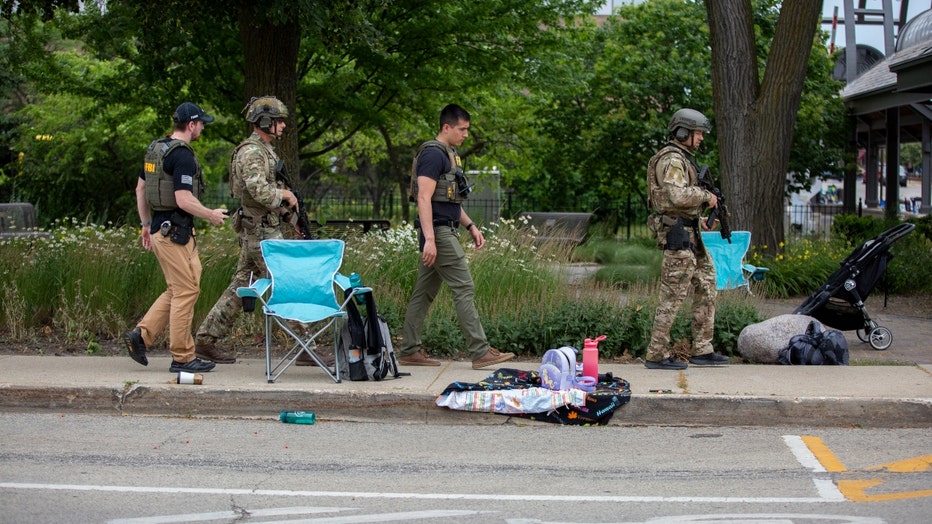 Law enforcement works the scene after a mass shooting at a Fourth of July parade on July 4, 2022 in Highland Park, Illinois. Reports indicate at least six people were killed and more than 20 injured in the shooting. (Jim Vondruska/Getty Images)

The Lake County Sheriff's Office, where Highland Park is located, confirmed that a shooting had occurred and urged people to stay out of the area. The sheriff's office did not confirm the number of victims, however.

The Highland Park Police Department confirmed they are responding to an "active situation" and will soon release a statement to Fox News Digital. The sheriff's office did not immediately respond to requests for comment from Fox.

Daly said that the situation in Chicago is going to require whatever resources are available, including local, county, and state police and the FBI. Furthermore, Daly added that with all the information available so far, "there wouldn't be any necessarily federal jurisdiction."

"They have the resources, the availability to be able to help to conduct forensics, perhaps if there is any kind of concern of this person fleeing across state lines or, you know, into other surrounding communities. They may be able to assist through some of their technology and their communications. So it does become a full effort."