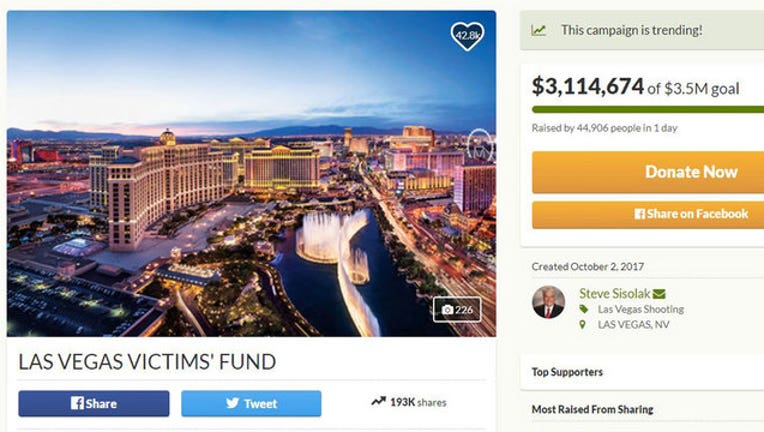 (WJBK) - The official GoFundMe account for the victims of Sunday's mass shooting in Las Vegas raised more than $3 million in just 24 hours.

The account was created Monday by Steve Sisolak, the Clark County Commission Chair from Las Vegas. Sisolak wrote that the funds raised will go towards relief and financial support to the shooting victims and their families.

The account was created with a goal of $3.5 million, and as of Tuesday morning more than $3.1 million had been donated.

According to donation records on the GoFundMe page, the Oakland Raiders and the NFL Foundation each made a $50,000 donation. Stephen J. Cloobeck is also listed as giving multiple $50,000 donations (seven, to be exact, along with one $40,000 donation).

Celebrities such as Florida Georgia Line, Kid Rock, Mike Tyson and The Chainsmokers are listed as donating $10,000. Sisolak himself also donated $10,000.

Donations in smaller sizes -- some as low as $10 -- are also pouring in from a countless number of others.

If you'd like to make a donation, you can do so on the GoFundMe account page here.

Later Tuesday afternoon, the campaign had upped its goal to $4 million.

The mass shooting in Las Vegas Sunday happened at a Jason Aldean concert during the Route 91 Harvest Festival. It is the deadliest mass shooting in modern U.S. history, with at least 59 killed and 527 injured.

The gunman, 64-year-old Stephen Paddock, killed himself as authorities stormed his hotel room at the Mandalay Bay hotel casino across the street from the concert venue.

He had 23 guns -- some with scopes -- in the room where he had been staying since Thursday. He knocked out two windows to create sniper's perches he used to rain bullets on the crowd of 22,000 some 500 yards away.