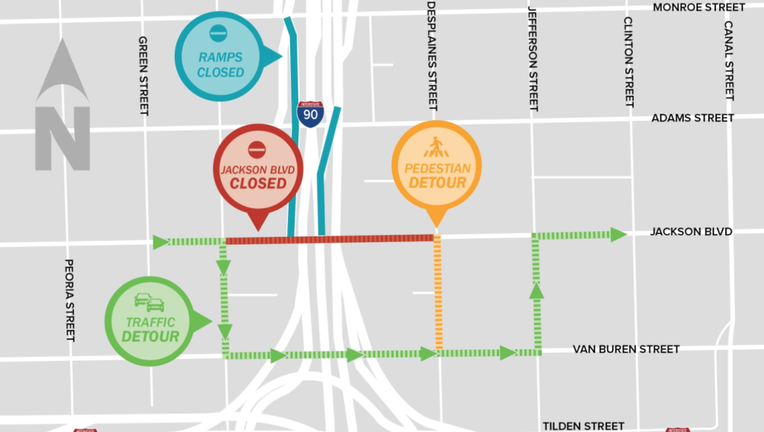 A map of detours during the replacement of the Jackson Boulevard Bridge. | Illinois Department of Tranportation

CHICAGO - One of the final bridges to be replaced in the seemingly never-ending Jane Byrne Interchange project will be closed for two years starting Friday.

The construction of a new Jackson Boulevard bridge over the Kennedy Expressway is set to begin 5 p.m. between Halsted Street and Des Plaines Avenue, the Illinois Department of Transportation said in a statement.

The new bridge will have a dedicated bike lane, wider sidewalks and two lanes of traffic, according to IDOT. An entrance ramp to northbound I-90/94 will be relocated from the left to the right side of the expressway.

“This coming year will see significant progress with the reconstruction of the Jane Byrne Interchange, and we look forward to the many improvements to come,” Acting Illinois Transportation Secretary Omer Osman said in the statement. “We appreciate the public’s continued patience.”

A detour will direct vehicles and pedestrians south on Halsted to the Van Buren Street bridge. Bicyclists are advised to travel south to the Harrison Street bridge, which has a bike lane.

So far, six bridges have been rebuilt in the Jane Byrne Interchange project, according to IDOT. The Jackson Boulevard and Adams Street bridges are the final two to be replaced.

The interchange project has face significant delays, as well as a budget that’s ballooned to more than $700,000. The entire project is expected to be completed by the end of 2020.

More than 400,000 motorists use the interchange each day, according to IDOT.