A jury on Friday convicted a man who prosecutors said plotted then tried to cover up the 2015 slaying of a 9-year-old boy who was shot after being lured into a Chicago alley with the promise of a juice box.

CHICAGO - A jury on Friday convicted a man who prosecutors said plotted then tried to cover up the 2015 slaying of a 9-year-old boy who was shot after being lured into a Chicago alley with the promise of a juice box.

Corey Morgan showed no emotion as a clerk announced that he was guilty of first-degree murder, a quiet ending to a story of a crime that shocked a city accustomed to almost daily instances of gun violence. Prosecutors argued that the Nov. 2, 2015, "execution" of Tyshawn Lee was carried out as revenge on a rival gang member, that Morgan and two others believed the fourth grader's father was responsible for a shooting weeks earlier that left Morgan's brother dead and his mother wounded.

The verdict came after a separate jury on Thursday convicted the alleged triggerman, Dwright Boone-Doty, and after a third man, Kevin Edwards, pleaded guilty last month in exchange for a 25-year prison sentence. Morgan faces up to 100 years in prison; Boone-Doty faces up to life.

According to courtroom testimony, Morgan began making plans to kill a relative of Tyshawn's father after the shooting death of Tracey Morgan.

"He said, 'Everybody must die,'" Moesha Walker, Edwards' sister, testified. "Grandmas, mamas, kids and all." 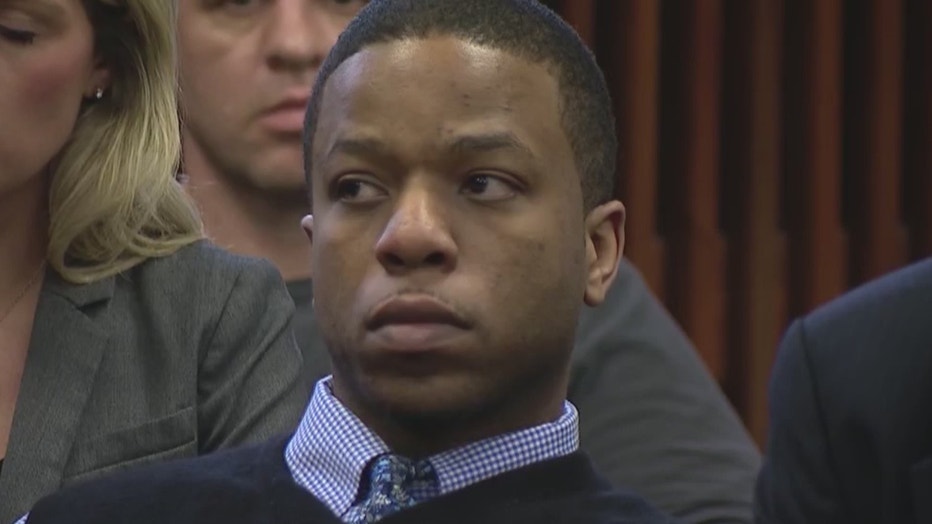 Tyshawn was killed after prosecutors say Morgan, Edwards and Boone-Doty spotted him shooting baskets at a park on the city's South Side. Morgan and Edwards watched as Boone-Doty walked over to Tyshawn, struck up a conversation and picked up the boy's basketball, they said.

What prosecutors said happened next turned one of hundreds of killings in Chicago that year into a national news story: Boone-Doty persuaded Tyshawn to come into an alley - out of sight of anyone else in the park - by promising him a juice box. Once in the alley, Boone-Doty pulled out a gun and fired several times at close range, according to prosecutors.

People in the park who came running over found the boy's body, his basketball a few feet away.

Prosecutors said Morgan gave Boone-Doty the murder weapon just before he approached the boy. They said another brother of Morgan's had bought the gun in New Mexico and mailed to him.

While Boone-Doty's DNA was found on Tyshawn's basketball, no such evidence linked Morgan to the crime. Instead, prosecutors relied on a witness who testified to seeing Morgan at the park and to seeing what he believed was a large gun in Morgan's pocket. They also presented GPS and cellphone evidence they said put him at the park that November day, as well as evidence that shortly after the shooting he started looking at the Facebook pages of Tyshawn's mom and dad.

"He wants to see them hurt the way he hurt," said Assistant State's Attorney Craig Engebretson.

Morgan's lawyers argued that police focused on him because he was a gang member, and they said the person who identified Morgan as being in the park did so only after asking about a reward. Police wanted to quickly solve the case and Morgan "made sense" because of the shooting of his brother and mother, attorney Todd Pugh told jurors Thursday.

"He, in the eyes of police, is one of those throwaway people," Pugh said. He later went on to add: "He was a gang banger who police thought was never going to amount to anything."

After the trial, Morgan's attorneys suggested jurors could not get past the horrific nature of the crime.

Cook County State's Attorney Kim Foxx, in a statement, acknowledged that the case had affected the community in a way that so many other stories about violence haven't.

"Even at a time when we've become nearly numb to headlines about violence, this case shook us to our core," she said as she applauded the verdict.