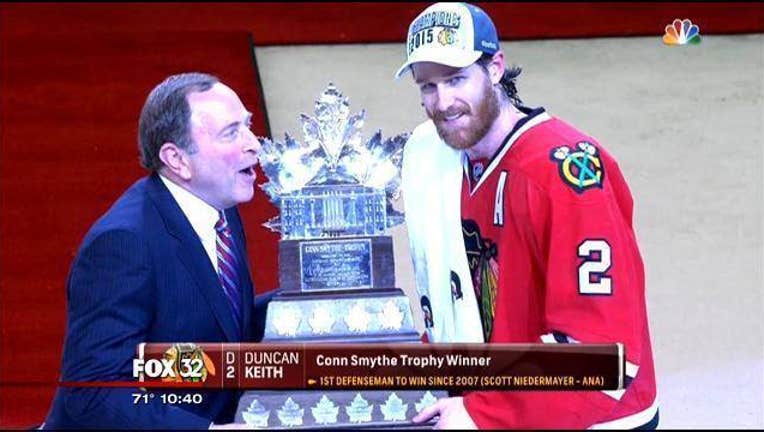 Duncan Keith rarely tired and never wavered during one of the most dominant postseason performances in NHL history.

And with a masterful finale for the Chicago Blackhawks, the defenseman etched his name on two trophies.

Keith capped his immaculate two-month run with the winning goal in Chicago's Stanley Cup-clinching 2-0 victory over the Tampa Bay Lightning in Game 6 on Monday night.

The 31-year-old defenseman was the unanimous choice to win his first Conn Smythe Trophy as the playoff MVP, adding it to a trophy case that includes three championship rings, two Norris Trophies and two Olympic gold medals.

Keith has been indefatigable on the Blackhawks' back end, logging an astonishing 31 minutes per game in the Blackhawks' 23 contests. He has played in every situation alongside just about every other Chicago defenseman, ceaselessly providing top-level defense along with three goals and 18 assists.

With his third Stanley Cup title in six years finally secure, Keith can get some rest.

And in modern hockey history, hardly anybody has deserved a break more.

Keith played 715 total minutes in the postseason, becoming just the fourth defenseman to top 700 playoff minutes since the league began tracking the statistic in 2001. He played well over 500 minutes of five-on-five hockey, crossing that mark in just 21 games.

Keith was tireless even in the clincher, playing 30:19 in Game 6 and putting six shots on Tampa Bay's net - none bigger than his goal.

Late in the second period of an impossibly tense scoreless game, Keith accepted a pass from Patrick Kane and winged a shot at Ben Bishop, who left a juicy rebound. Keith followed the puck around Cedric Paquette and beat Bishop on the short side, providing a cathartic release for the fans packed into the United Center anticipating Chicago's third title in six years.

Keith is just the 11th defenseman in NHL history to score at least 21 points in a single playoff run. Chris Pronger did it most recently in 2006.

Keith has said his meticulous attention to conditioning, diet and injury prevention allow him to play so many minutes, even at 31 years old.

Keith's extra work was borne out of necessity, at least according to coach Joel Quenneville. After Michal Rozsival was hurt in the second round, Quenneville showed little faith in David Rundblad, Kyle Cumiskey or Kimmo Timonen, the three defensemen who took turns as Chicago's third pairing over the last two months.

Instead, the Blackhawks relied inordinately on three-time Cup winners Brent Seabrook and Niklas Hjalmarsson, two-time champion Johnny Oduya and Keith, who shouldered the biggest load of all.

Keith started the Blackhawks' playoff run with a double-overtime goal to win their first-round opener against Nashville. His heavy workload peaked in the grueling Western Conference finals against the Anaheim Ducks.

Although he took a physical pounding from Anaheim's bad-tempered forwards, he shrugged off every combined hit and check to keep the Blackhawks moving forward.

Keith has won more championship hardware than just about any player of his generation. He has Olympic gold medals from the Canadian teams in Vancouver and Sochi, and he won the Norris in 2010 and again last season as the NHL's top defenseman.

And now Keith is the first defenseman to win the Conn Smythe since Anaheim's Scott Niedermayer in 2007 and just the fourth since 1994.