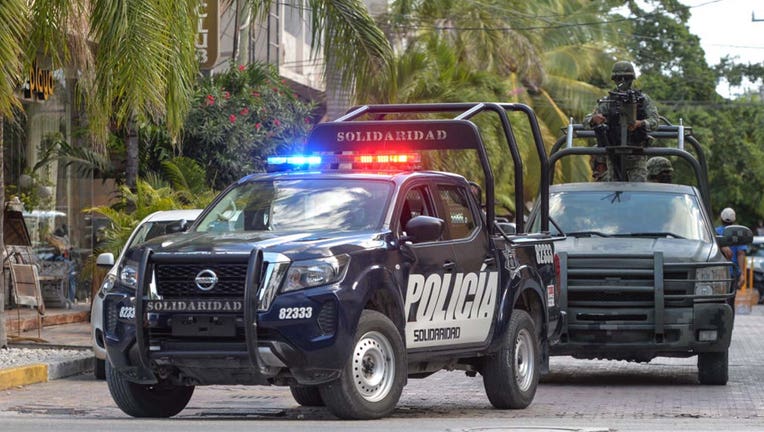 FILE - Members of the Police and the Mexican Army patrol the center of Playa Del Carmen. (Artur Widak/NurPhoto via Getty Images)

Shots were reported around 8:30 p.m. at the Art Beach Restaurant, which sits along the Mayan Riviera near Tulum’s hotel zone in Cancun.

Quintana Roo State Attorney General said it had opened an investigation into the shooting. It identified the injured victim as "L.A.A.C., aged 24" but did not provide more details.

The Cancun Sun reports that the men who were shot were having dinner at the restaurant when suspected members of a rival drug cartel stormed in and opened fire. As many as 20 gunshots were heard, according to the outlet.

Fox News has reached out to Art Beach for comment and will update this story accordingly.

A spate of violent incidents at Mexico’s beach resorts in recent months has challenged their reputation as being normally safe for tourists.

Just last month, two Canadians were killed and another was wounded in a shooting at the Hotel Xcaret along Mexico’s Caribbean coast.

In December, a group of people on jet skis fired gunshots into the air within the Hotel Zone of Cancun. The gunshots sent tourists scrambling for cover, but no injuries were reported.

In November, a shootout on the beach of Puerto Morelos left two suspected drug dealers dead. Authorities said there were some 15 gunmen from a gang that apparently disputed control of drug sales there.

In late October, two tourists — one a California travel blogger born in India and the other German — were caught in the apparent crossfire of rival drug dealers and killed in Tulum.

FOX News’ Adam Sabes and The Associated Press contributed to this report.