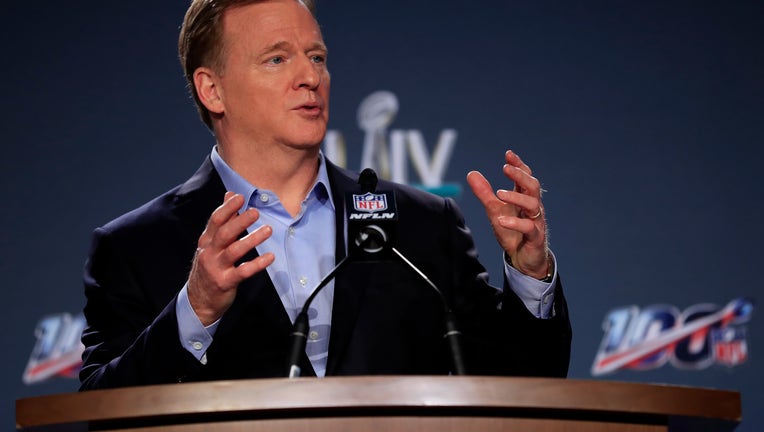 FILE - NFL Commissioner Roger Goodell speaks to the media during a press conference prior to Super Bowl LIV at the Hilton Miami Downtown on Jan. 29, 2020 in Miami, Florida.

LOS ANGELES - NFL Commissioner Roger Goodell announced in an open letter published on Monday that the league’s preseason games have been canceled due to concerns over the ongoing coronavirus pandemic.

“The NFL in 2020 will not look like other years," wrote Goodell, adding his belief that COVID-19 is expected to continue to "present a major challenge to nearly every area of American life."

"Players and coaches will be tested for the virus regularly, including every day for a while. Preseason games have been canceled," Goodell wrote.

The commissioner added that the NFL will have to get used to a new set of guidelines in the pandemic era, stating that players and coaches will be regularly tested for the novel coronavirus, “including every day for a while.”

RELATED: 'Get the he-- out of the country': Mike Ditka slams NFL players who kneel during the national anthem

“Even the sideline will look different. And, state and local health guidelines will help determine whether fans will attend the games. These adjustments are necessary to reduce the risk for everyone involved,” added Goodell.

The news of the preseason cancellation comes as the 2020 Major League Baseball season faces disruption amid the discovery of COVID-19 cases in players.

The Miami Marlins received positive test results for four additional players Tuesday, a person familiar with the situation told The Associated Press. The person declined to be identified because the results had not been publicly released.

The Marlins' outbreak raised new questions about MLB's attempts to conduct a season outside of bubble environment, which the NFL also has opted not to create for its season.

“This could put it in danger,” Dr. Anthony Fauci, the nation’s top infectious disease expert, said of the outbreak. "I don’t believe they need to stop, but we just need to follow this and see what happens with other teams on a day-by-day basis.”

Fauci made his comments on ABC's “Good Morning America” before the news of the Marlins' latest test results.

“Major League Baseball — the players, the owners, the managers — have put a lot of effort into getting together and putting protocols that we feel would work,” Fauci said. “It’s very unfortunate what happened with the Miami (Marlins).”

Miami played at Philadelphia last weekend. The Yankees are scheduled to host the Phillies on Wednesday and Thursday, but the game was postponed Tuesday for the second straight day, according to a person familiar with the league’s decision.

The Phillies were waiting for complete results from their COVID-19 tests following an outbreak among the Miami Marlins, who played a weekend series in Philadelphia. The person spoke to The Associated Press on condition of anonymity because Major League baseball hadn’t announced the postponement.
.
“Obviously, we don’t want any player to get exposed. It’s not a positive thing,” Commissioner Rob Manfred said Monday night on the MLB Network. “But I don’t see it as a nightmare... We think we can keep people safe and continue to play.”

Meanwhile, Chicago White Sox manager Rick Renteria will be kept away from his team after experiencing a “slight cough and nasal congestion,” general manager Rick Hahn said. Tests were planned.

The NBA and NHL plan to resume their seasons in bubble environments, with basketball at Lake Buena Vista, Florida, and hockey at Edmonton, Alberta, and Toronto.

“The NBA and the NHL have an advantage: smaller numbers of players, shorter period of time,” Manfred said. “I understand why they did what they did. I’m just not sure it was workable for us.”

The NFL has opted not to create a bubble environment as training camps open this week.

“It might be that they have to go in a bubble,” Fauci said, "but I think they’re conscientious enough and want to protect their players and protect the personnel that they will do the right thing.”