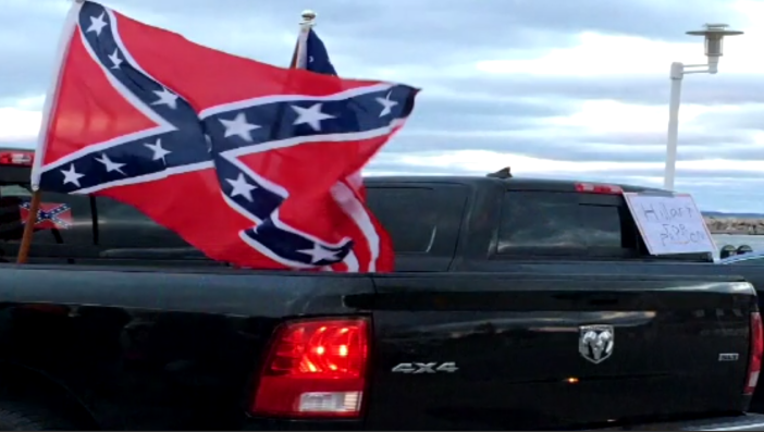 FILE - A confederate flag seen in the bed of a truck. (FOX TV Stations)

RALEIGH, N.C. - The North Carolina Division of Motor Vehicles is no longer issuing specialty license plates featuring the Confederate battle flag, according to a statement.

The agency said the removal of the license plate, issued to members of the Sons of Confederate Veterans organization, took effect Jan. 1, the StarNews of Wilmington reported. The move comes six months after NCDMV acknowledged it had received complaints about the Confederate battle flag appearing on a specialty license plate.

"The Division of Motor Vehicles has determined that license plates bearing the Confederate battle flag have the potential to offend those who view them," the agency said in a statement. "We have therefore concluded that display of the Confederate battle flag is inappropriate for display on specialty license plates, which remain property of the state."

NCDMV said it will continue to recognize the North Carolina Division of Sons of Confederate Veterans as a civic organization entitled to a specialty plate, but the recognition does not entitle it to dictate the contents of the government speech on that plate.

In its statement, the NCDMV said it remains in accordance with the ruling, which it said does not extend to the actual contents of the specialty plate.

The NCDMV confirmed it had received complaints about plates bearing the Confederate flag in light of nationwide protests over the death of George Floyd while in police custody in Minneapolis.

The DMV said it remains open to considering an alternative design and would resume with issuing a specialty plate for Sons of Confederate Veterans members upon approval. But until such an agreement is made, it will "either issue SCV members standard plates and refund any specialty-plate fees paid or provide them with different specialty plates," according to the statement.

Last summer, North Carolina Sons of Confederate Veterans chapter spokesman Frank Powell said the plates were a symbol of members for those in the organization. WRAL reported Monday that Powell said the group believes the change is illegal and that the SCV’s legal team is reviewing options.

"The DMV doesn’t get to choose what logo we use," Powell said.