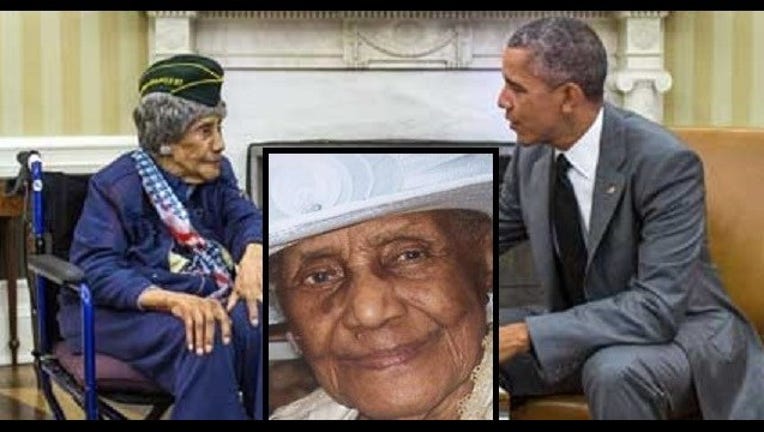 Obama says Emma Didlake's service is a reminder of the sacrifices made by those who fought in World War II or supported those did.

Didlake was a 38-year-old wife and mother of five when she signed up for the Women's Army Auxiliary Corps in 1943.

She held the rank of private and served stateside for about seven months as a driver.

Didlake sat in her wheelchair in the same spot in the Oval Office where foreign leaders sit when they meet with Obama.

As a scrum of reporters and photographers rushed in, Obama told Didlake, "Don't worry about these folks."

Obama tweeted afterward that Didlake is a "true American hero."

"Just very briefly, I want to introduce everybody who have not had a chance to meet her.  Ms. Emma Didlake is our oldest living veteran -- 110 years old, born in 1905, and served with distinction and honor, and received all sorts of commendations for her service during World War II.

"We are so grateful that she is here with us today.  And it's a great reminder of not only the sacrifices that the Greatest Generation made on our behalf, but also the kind of trailblazing that our women veterans made, African American veterans who helped to integrate our Armed Services.  We are very, very proud of them.  That's why we got to make sure we do right by them.

"So it's a great honor to have her here."

On Friday she is taking a special honor flight to Washington DC to meet President Barack Obama.

"She said 'Am I going really?'" said Marilyn Horne, Emma's granddaughter. "I said yes if we can keep you well enough."

A fall a few weeks ago hasn't stopped the country's oldest living veteran from going on a trip to meet the president.

Didlake is resting right now, but Marilyn, who will be escorting her to the White House, says she couldn't be happier.

"As you can imagine she is very weak," Marilyn said. "But she is looking forward to just meeting him. She never thought she would see this in her lifetime."

Big Mama as Emma is known, joined the Military in 1943 at the age of 38. She was already a wife and mother and she served for seven months as an Army private and a driver.

"She said she didn't know she was doing anything," Marilyn said. "She just wanted to do something different and decided to join the military."

Emma and her family moved to Detroit after she was discharged where she became a member of the Detroit chapter of the NAACP and marched with Rev. Martin Luther King, Jr. in 1963.

A couple of years ago she received a lifetime achievement award from the chapter.

The Talons out of Southwest Michigan, a non-profit which honors veterans for their service and sacrifice learned Emma was the oldest living veteran -  and of her accomplishments.

They organized the Friday trip to the nation's capital.

Dan Moyle, co-founder of the group helped to make it happen.

"She broke so many barriers as a woman back in those days," Moyle said. "Especially as a minority woman, we really wanted to honor her with a visit with the president because it's an honor for him to meet her.

"So it was important to make that happen."

Marilyn says her grandmother is so excited, but just like any true woman, she was worried about what to wear.

"It was supposed to be a short sleeve shirt," Marilyn said. "But we decided to give her a blouse, she's going to have her arms covered up because she says she doesn't have 'Michelle Obama arms' so she cannot go in there short sleeves on, she said that's not happening."

Big Mama as they call her, has five children, 11 grandchildren and five great great grandchildren. They know how special she is, now they are happy so many others will too.

"As they say, get your roses while you're here," Marilyn said. "As opposed to waiting until she's gone and saying 'she did this, she did that.'

"Now she gets to hear all of that stuff now."