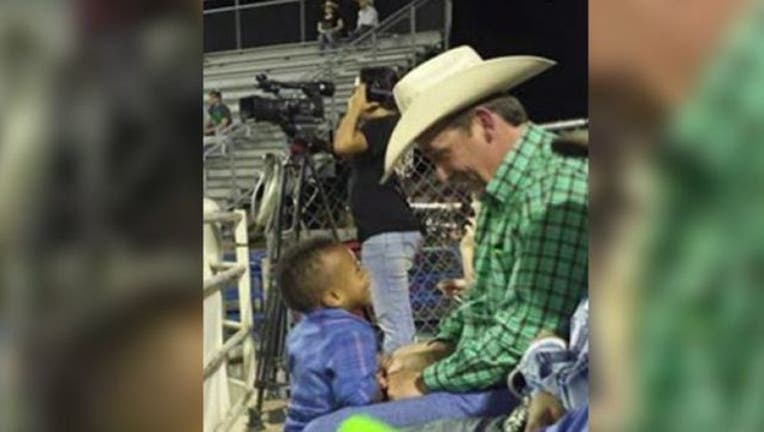 Charity Stewart Robinson recently attended a rodeo in Gladewater, Tex., with her children.

When she saw her newly adopted son, Lincoln, who has been diagnosed with language and sensory processing disorders, bond with a man in a cowboy hat, she snapped a photo and posted it to Facebook.

Robinson's heartfelt Facebook post quickly went viral — it's already been shared more than 160,000 times. Not surprisingly, she soon learned the identity of the kindhearted stranger.

Charity and Lincoln, along with the mystery man, Pastor Jason Taylor, appeared on "Fox and Friends Weekend" to share their inspiring story.

Charity explained that three-year-old Lincoln has had difficulty interacting with others, so to see him laughing and playing with Taylor was an amazing experience.

"I had tears streaming down my face," Charity said.

She added that night changed their lives. Not only did they attend Taylor's church to hear his preaching soon after, they will be friends forever, she said.

"We try so many things and do so much to share and spread the love of Jesus," Taylor explained. "It was, kind of, the Scripture lived out."

"Lincoln didn't focus on the differences that we have ... if we focus on differences, it always divides," Taylor said. "Lincoln just found the common bond, and that common bond is the love of Jesus."

Dear stranger next to us at the rodeo,

When my son came up to you and grabbed your arm, you didn't know he used to be terrified of people. When he talked to you about the bulls, you didn't know he was diagnosed with a language disorder. When he jumped in your lap and laughed as you tickled him, you didn't know he had a sensory processing disorder. You also didn't know as his mother, I sat in my seat, with tears running down my face, sneaking this photo. When we adopted him a few short months ago, we didn't know how long it would take for him to laugh, play and engage others like this. You didn't know any of this, but you took time to connect with a child who has had to fight to learn to connect. My heart is full. Thank you.