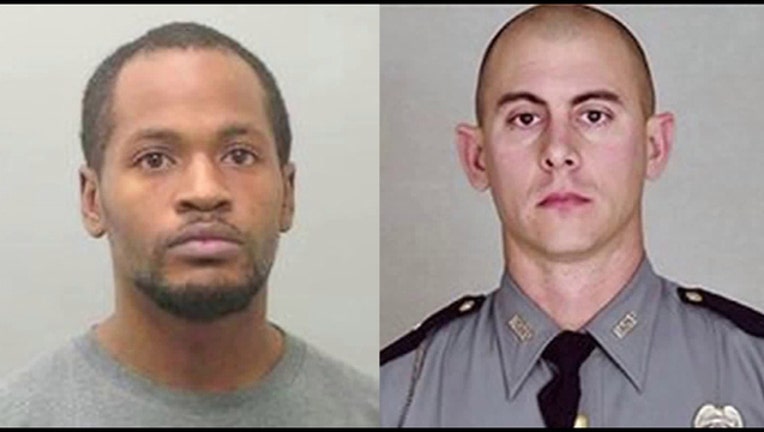 EDDYVILLE, Ky. (AP) — A Kentucky state trooper was killed in a shooting during a chase, and officers shot and killed the suspect when he refused to drop his weapon after an hours-long manhunt, police said Monday.

Trooper Joseph Cameron Ponder, who was 31 and had been on the force less than a year, was conducting a traffic stop Sunday night on Interstate 24 when the driver fled, Kentucky State Police said.

A chase ensued with the suspect stopping abruptly, causing the trooper's vehicle to "make contact" with the rear of the suspect's vehicle, said Trooper Jay Thomas, a state police spokesman.

"At that point, the suspect leaned out of the driver-side window and fired multiple rounds at the trooper's car, striking the hood, the windshield and striking our trooper," Thomas said.

Ponder was hit multiple times and was taken to a hospital, where he died shortly before midnight.

The suspect, 25-year-old Joseph Thomas Johnson-Shanks of Florissant, Missouri, ran away and was found hours later in a rural, wooded area a couple of miles from the shooting, Thomas said. Johnson-Shanks refused to drop his weapon and was shot by officers, and he later died at a hospital, Thomas said.

Ponder had graduated from the Kentucky State Police training academy in January and was stationed at the state police post in Mayfield, police said. He was single and a Navy veteran.

"He was very proud to be a Kentucky State Trooper," Thomas said. "He was new, he was eager and just absolutely loved his job."

State police said numerous law enforcement agencies, as well as helicopters and dogs, were used to help with search efforts in the rural, wooded area that has homes scattered about. Thomas said there are numerous vacant summer homes in the area.

Police say Interstate 24 will remain shut down from mile markers 45 to 56 while investigators collect evidence.

Thomas said three other people were in the suspect's vehicle when he stopped — a woman and two children. Thomas said they were questioned but have not been charged or arrested. He did not release their names and did not know their relationship to the suspect.

Thomas said he didn't know the reason for the initial traffic stop on the vehicle, which was headed west on I-24.

Calls by The Associated Press to a home telephone listing for Johnson-Shanks went unanswered Monday.

Shawn McGuire, a St. Louis County police spokesman, said Johnson-Shanks had been arrested in August 2014 for failing to appear in an unspecified case. In May of this year, investigators began searching for him for questioning in the theft of lottery tickets.

Ponder is the second trooper from the Mayfield post to be killed in the line of duty this year.

In June, 23-year-old Erick K. Chrisman died in a traffic crash while responding to a reckless driving complaint. He had also graduated from the police academy in January.

"We're all just holding together the best that we can and just continue to do our jobs," Thomas said.

"We face dangers every day that ... we put our uniform on and we go out to protect the public," Thomas said. "It's part of our job. We know the risks that are out there and we accept those risks."

Gov. Steve Beshear called the shooting a "tragic reminder of the risks that our law enforcement officers face every day just by putting on their uniform and doing their job.

"That he was killed in the line of duty makes his death memorable, but we must never forget the most significant part of Trooper Joseph Cameron Ponder's story — how he lived, his selfless service to others, and his willingness to give his life for that commitment."