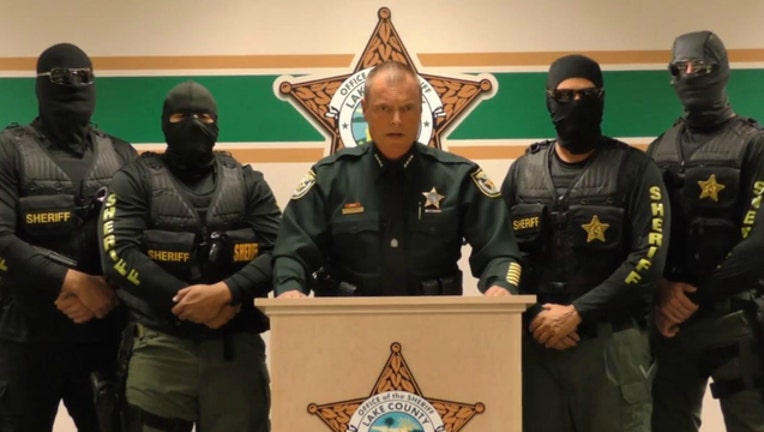 TAVARES, Florida (Fox 32 News) - A sheriff's department PSA about heroin overdoses in his county was questioned by some on social media over the weekend, because of the way some officers were dressed.

In the video, Sheriff Peyton C. Grinnell of Lake County, Florida, is surrounded by four officers wearing balaclavas (masks).  Some are also wearing sunglasses, although the video was shot indoors. The officers seem to be undercover.

At the end of the video, Grinnell warns drug dealers their days of freedom are numbered.

"Enjoy looking over your shoulder constantly wondering if today's the day we come for you,"  Grinnell said in the video. "We are coming for you. Run."

After Grinnell delivers this last line, he and the other police officers file out.

On Twitter, some said the video reminded them of threatening videos sent out by ISIS and other terrorist groups.

@ArmyStrang tweeted: These cops look like they're going to create a caliphate and behead moderate police officers

@RezOKC tweeted: An ISIS flag graphic in the upper-right corner would not look at all out of place in this video.

Many of the comments on the department's Facebook page were of a similar vein, but there were some supporters. Cheryl Blotnick-Gaidelis wrote: "What's with all the negativity! They can't show their identity because are the ones playing the role of being buyers or dealers. Grow up. Let them do their job protecting us and our families and friends. I've lost family to these thug dealers. They don't care. They just want the money."

And Gregg Gottschling wrote, "I thought it was great. Get these scumbags off the street."

Fox 32 News reached out to the Lake County Sheriff's Department for reaction on Sunday night, but had not heard back yet.