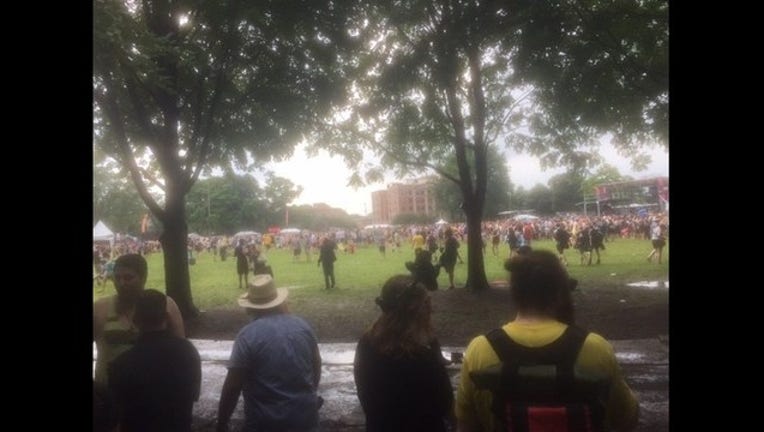 A severe storm that briefly pummeled downtown Chicago Saturday afternoon also put the tunes at Pitchfork Music Festival on pause for a while as attendees were told to take cover.

Festival goers were told to evacuate about 3:45 p.m. but were being let back through security at 4:20 p.m., according to the fest’s officials Twitter feed.

The storm accompanied a tornado watch and heat advisory in effect for Chicago through the evening. The tornado watch went into effect at 1:30 p.m. for several counties, including Cook, Will, DuPage, Lake, Kane and McHenry, and is slated to last until 10 p.m.

A tornado watch for McHenry County was briefly upgraded to a warning at 2:30 p.m. after a thunderstorm capable of producing a tornado was spotted near Harvard, the National Weather Service said. But it was canceled just before 3 p.m.

Earlier Saturday, a heat advisory and a hazardous weather statement warned of dangerously muggy temperatures and potentially severe storms for the Chicago area and across all of northern Illinois.

The day could have been Chicago’s hottest this year when the temperature was expected to hit 96 degrees at 10 a.m., according to National Weather Service Meteorologist Gino Izzi.

So far, the hottest days of the year in Chicago have been Friday and June 10. Both saw highs hit 92 degrees, Izzi says. The highest temperature ever recorded on a July 18 in Chicago was 100 degrees. That was in 1946.

The unexpected cool down could be the result of a lake-effect breeze and the flow of air from a storm in Wisconsin, Izzi says.

Still, things could actually feel between 100 to 105 degrees with the humidity, Izzi says. That’s thanks to the heat index — summer’s version of the wind-chill factor.

The heat advisory, set to last until 8 p.m., was issued for all of northern Illinois. It warns that the combination of heat and humidity will create “oppressive” conditions and could cause heat-related illnesses, especially among older people and those who are sick.

After Chicago bakes for a while, there’s a 60 to 70 percent chance of thunderstorms between Saturday afternoon and evening, according to the weather service.

While no warning was issued, storms could potentially turn severe with 70 mph wind gusts and quarter-sized hail.

Sunday could also see storms should be cooler, the weather service forecasts,with a high of 88 and a low of 68.