Boy captivated by Target ad featuring child 'like him'

Oliver Garza-Pena became captivated after noticing an advertisement featuring a boy in a wheelchair just like him.

PEORIA, Ariz. - An advertisement featuring a boy in a wheelchair stopped little Oliver Garza-Pena in his tracks during a Target run with his mother.

Oliver, who turns 2 in March, has a rare condition called caudal regression syndrome, which impairs the development of the lower half of the body. He uses a wheelchair to get around, which his mother, Demi Porter Garza-Pena, calls an “amazing asset.”

In a Facebook post shared to a page dedicated to Oliver, his mother shared how the young boy noticed another boy “like him, smiling and laughing on a display at Target” during a trip last week to a store in Peoria, Arizona, along with a photo of the touching moment. 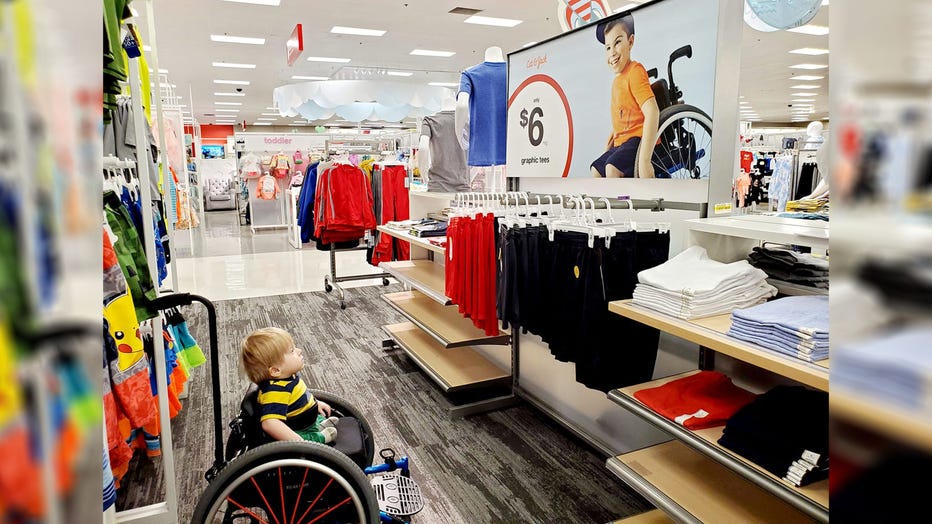 Oliver Garza-Pena is pictured admiring an advertisement of a boy in a wheelchair displayed at a Target store in Peoria, Arizona. (Photo credit: Demi Porter Garza-Pena / Ollie’s World on Facebook)

“Today Oliver stopped me dead in his tracks and turned back around to see this picture that he spotted! He just stared at it in awe,” the Feb. 4 post reads on the Facebook page Ollie’s World. “Oliver sees kids every day, but he never gets to see kids like him.”

The post was shared more than 31,000 times and generated thousands of comments commending Target for using advertising that is more inclusive of those living with disabilities.

“This was amazing! I am so happy that other kids that pass through here with their parents will see this,” Oliver’s mother added in the post. “There is a lot of focus on representing diversity, but representing people with disabilities is just as important!”

Demi Porter Garza-Pena said the post was so widely shared, it even made it back to the boy featured in the display and his family.

“Simply in tears looking at this picture. God Bless you little man, and thank you Target for doing this,” one Facebook user commented on the post.

“Representation matters. I’m glad this had such an impact on your little one,” another wrote.

Last year, Target's Hyde and Eek! Boutique unveiled Halloween costumes adapted for those who use a wheelchair.

Caudal regression syndrome affects an estimated 1 to 2.5 out of every 100,000 newborns, according to the U.S. National Library of Medicine. In Oliver’s case, his spinal cord only developed to the T12 vertebra, which is approximately at the same level as the bottom of his rib cage, according to his Facebook page.

“It has really touched our hearts to see how many other people stand strong with us about how much representation and inclusion matter,” Oliver’s mother shared in a follow-up post.