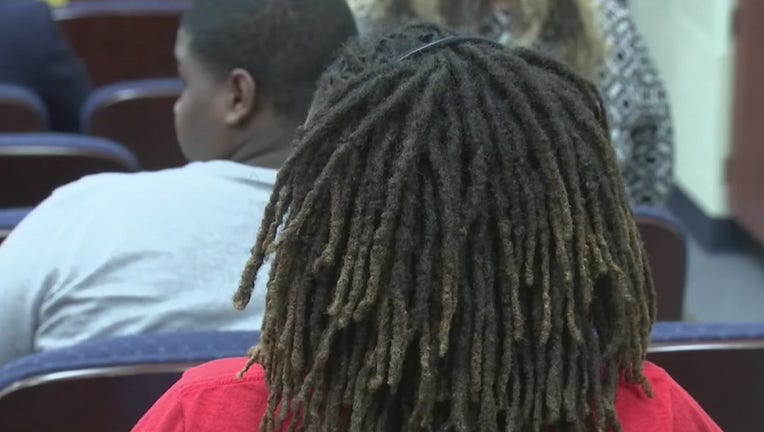 MONT BELVIEU, Texas - The high school senior at the middle of a controversy surrounding the length of his dreadlocks has withdrawn from Barbers Hill ISD, his family says.

De'Andre Arnold has been growing his dreadlocks in a traditional Trinidadian style for eight years. Just a few months before he's due to graduate, De'Andre has been found in violation of hair length in the dress code.

Deandre Arnold, 18, has been a student at Barbers Hill ISD his entire life and has been growing his dreadlocks since he was 10 years old with no issues. For some reason back in December, Deandre was told to get rid of the dreads or spend the rest of the year in in-school suspension, which would mean he couldn't walk the graduation stage with the rest of his classmates in the spring. If you support Deandre Arnold, call Barbers Hill ISD to voice your opinion on Tuesday after Martin Luther King Jr. Day at 281-576-2221.

De'Andre and his family have been fighting the district because they say the dress code is a violation of his civil right to wear dreadlocks.

On Friday, his family told FOX 26 that he has been withdrawn from the district and enrolled in another school.

Barbers Hill ISD issued a statement Tuesday saying, "Barbers Hill ISD has a long-standing dress code, but we absolutely allow dreadlocks. What we do not allow is any action that circumvents or violates the provision regarding hair length. The student in question was NEVER forbidden from attending school. The U.S. Constitution allows a school board the right to implement local community expectations, and Barbers Hill ISD’s continual academic and extra-curricular successes are a direct result of our communities’ high expectations."