CHICAGO - A Chicago teen's decision to pay a visit to her old neighborhood turned deadly when a gunman opened fire.

Now, police want to find the man who pulled the trigger, saying they have not forgotten about catching the killers who are terrorizing our city.

Jazmyne was just 15 when she lost her life near 69th and South Carpenter. The young teen was simply paying a visit to say hello to her old neighbors.

“Jazmyne was always full of life. She was my silly child, laughing, joking, making people laugh. She always made me smile, laugh, even when I was stressed to the max. You know, she would always put a smile on my face. That was Jazmyne, just free-spirited. A fun-loving, little girl,” Jazmyne’s mom Desiree said.

Desiree gave her daughter permission to visit her old neighborhood, never thinking it would be her child’s last moments, until she got the call from Jazmyne’s sister.

“I answer the phone and she was hysterical. She’s screaming. I’m like ‘calm down, I can’t hear you, I can’t understand what you are saying.’ You know, she was crying. And all I heard her say is ‘Jazmyne was shot.’ I’m afraid at this point, but she said shot. People get shot all the time and they pull through. At that point, I’m still holding on to hope that she was okay. That she was still alive,” Desiree said.

Doctors at Advocate Christ Medical Center would try to save her, but the injury was too much for Jazmyne’s body. 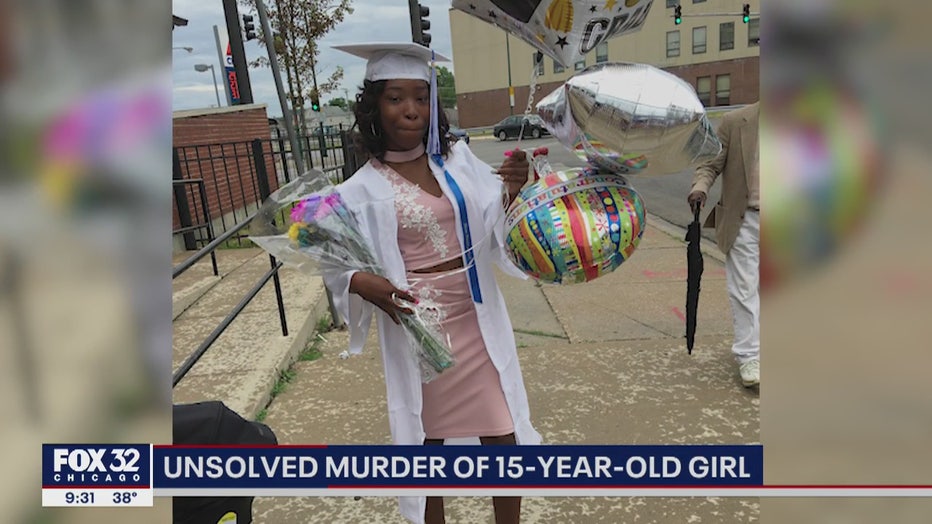 “I couldn’t believe the words that just came out of her mouth that my daughter was dead. No parent wants to hear that about their child that they cared for, fed, clothed, carried for nine months, gave birth to. No one should have to go through this,” Desiree said.

“Unfortunately, she was at the wrong place at the wrong time and she ended up getting struck in the chest with one of the rounds, and it was a fatal gunshot wound,” said Area South Police Detective Jeremy Morales.

Morales has been working this case for a year and a half now. He believes Jazmyne was never the intended target. He thinks the gunman was hoping to hit the people Jazmyne was visiting and that the getaway car dropped him off in the alley out back so he could surprise his victims through an empty lot.

“So this is Aberdeen, this is one block west of Carpenter, which is on that side. The individual in question, after the shooting, ran westbound from Carpenter through the empty lot that he came out of towards Aberdeen. I mean, you can see it’s wide open in some places,” Morales said.

Investigators found bullet casings both where the gunman opened fire and from in front of the home where Jazmyne had been sitting on the porch, which is an indication that there was return fire.

Even now, the home that the shooting took place outside of still has bullet holes in the windows. It is an ugly reminder that gangs still terrorize parts of our city, but Detective Morales says it does not have to be that way if you turn in the terrorists.

“Well I mean that’s what these individuals prey on is your fear of not testifying,” Morales said. “Maybe if people were brave enough to come and testify, maybe that would get these guys to think twice like ‘I better not do this or someone is gonna tell on me.’”

“I don’t speak for me. I want to speak for all the parents that lost a child to this madness and the case is not solved. I just want people to do the right thing. If you know something, say something,” Desiree said.

She says she will never stop hoping for justice. Not now, not ever.

“I have to do something for her name, her spirit, her legacy, whatever, to be out here, stay alive. I want justice for Jazmyne. That’s what it boils down to,” Desiree said.

This is one of those cases that police say they just need that one person willing to come forward. If you know who was behind this attack on Jazmyne Jeter, give police a call and help them catch the killers.