President Donald Trump was defiant in the face of an impeachment probe Thursday as he sought to convert the threat to his presidency into a weapon on the campaign trail, with biting and unsupported attacks on potential Democratic challenger Joe Biden.

MINNEAPOLIS - President Donald Trump was defiant in the face of an impeachment probe Thursday as he sought to convert the threat to his presidency into a weapon on the campaign trail, with biting and unsupported attacks on potential Democratic challenger Joe Biden.

Confronting an investigation provoked by his unprecedented calls for Ukraine and then China to assist in digging up dirt on his political rivals, Trump continued to lay into Biden and his son Hunter, whom he and his allies have accused, without evidence, of illegally profiting off his father's office.

"The Bidens got rich, and that is substantiated, while America got robbed," Trump said. While the young Biden did have business interest overseas while he father was in office, there is no evidence of misconduct. Trump's adult children have faced congressional scrutiny for their foreign business dealings while their father is serving as president, and Trump still maintains ownership stakes in his family's businesses.

The rally in Minneapolis, the first since Democrats began proceedings two weeks ago to remove him from office, served as a proving ground for the president as he tries to use the impeachment inquiry to energize supporters for his 2020 campaign by casting himself - and his supporters - as victims of Washington Democrats.

The performance revealed a defense strategy largely detached from the allegations Trump faces. Trump spent little time defending his attempt to pressure the Ukrainian president to investigate the Bidens. Instead, he cast the impeachment fight in simpler basic terms - a battle between him and the "swamp."

He added, "The Democrats' brazen attempt to overthrow our government will produce a backlash at the ballot box the likes of which they have never ever seen before in the history of this country." 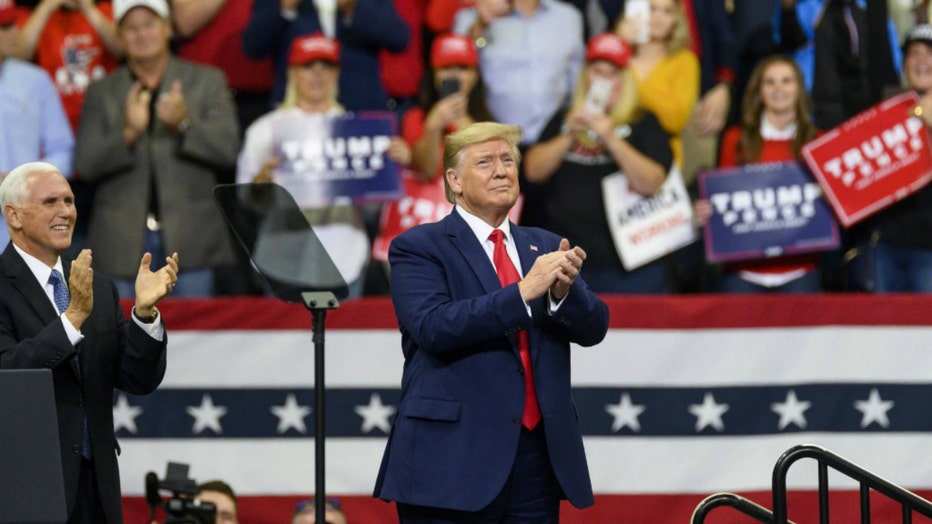 Vice President Mike Pence (L) claps as U.S. President Donald Trump takes the stage during a campaign rally at the Target Center on October 10, 2019 in Minneapolis, Minnesota. The rally follows a week of a contentious back and forth between President

Trump was by his own admission fired up and off script as he spoke for more than 90 minutes. Few of his political opponents were spared from insults. He said Biden "was only a good vice president because he knew how to kiss Barack Obama's ass." He called Minnesota Rep. Ilhan Omar "a disgrace" and an "America-hating socialist." He said House Speaker Nancy Pelosi was "really stupid."

Omar responded on Twitter, "His hate is no match for our movement."

Trump turned his cuts to the nation's refugee resettlement programs into an applause line and defended his decision to "bring our soldiers back home" from Syria, as he faces criticism for abandoning the U.S.'s Kurdish allies to an attack by Turkey.

Before Trump took the stage, his son Eric warmed up the crowd with an attack on the Bidens.

The younger Trump asked the crowd for an assessment of how Hunter Biden is feeling and suggested that the familiar Trump rally chant of "Lock her up" - directed at Hillary Clinton - become "Lock him up" instead. The crowd then chanted, "Lock him up, lock him up."

Trump fell about 45,000 votes short of beating Democrat Hillary Clinton in Minnesota in 2016. He has had staff in the state since June building a network to turn out supporters next November, and the well-funded Trump campaign says it will spend tens of millions of dollars to try to win the state.

"We are going to win this state," Trump said Thursday.

Protesters converged on Target Center, Minneapolis' basketball arena, hours before Trump's appearance, eventually packing the streets surrounding it. Many blew brightly colored whistles handed out by fellow protesters, adding to the din of frequent chants like, "Lock him up! Lock him up! Lock him up!" - referring to Trump himself. Some clutched helium-filled balloons depicting Trump as a baby, similar to the famed Baby Trump balloon that flew above a nearby building.

"I'm a registered GOP member, and I've never been more ashamed of our party," she said. "I didn't vote for him."

Inside the arena, Lori Glass, a longtime Republican from White Bear Lake, a Twin Cities suburb, dismissed the talking of impeachment with one word: "Ridiculous."

"He's done so much for the country," she said, citing the economy as Trump's top accomplishment. Democrats are pressing for impeachment because "they don't have a good candidate," she said.

On Friday, Trump planned a rally in Louisiana against Democratic Gov. John Bel Edwards. Aides said Trump is not endorsing one of the GOP candidates in the race before Saturday's election to maximize the chances that Edwards falls below the 50 percent threshold needed to avoid a runoff.

Next week Trump is set to hold a rally in Dallas, a GOP stronghold in a state that has grown more competitive for Democrats in recent cycles.