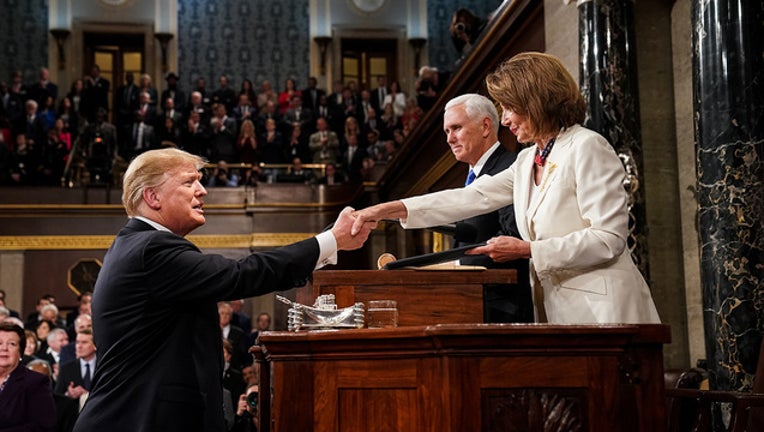 President Donald Trump shakes hands with Speaker of the House Nancy Pelosi while joined by Vice President Mike Pence before delivering the State of the Union address on February 5, 2019 in Washington, DC. (File photo by Doug Mills-Pool/Getty Images)

Pelosi acknowledged in a letter to rank-and-file Democrats that the party's officeholders have a range of views on how to proceed. But she counseled them repeatedly to go after facts, not resort to "passion or prejudice" in the intense run-up to the 2020 presidential and congressional elections.

"We all firmly agree that we should proceed down a path of finding the truth," Pelosi wrote. "It is also important to know that the facts regarding holding the president accountable can be gained outside of impeachment hearings."

"Not even a little bit," he said when asked Monday whether he was concerned about impeachment. However, his many tweets seeking to undermine the report's credibility - even calling it "bullshit" - indicate he is hardly shrugging it aside.

"Only high crimes and misdemeanors can lead to impeachment," he said Monday on Twitter. "There were no crimes by me (No Collusion, No Obstruction), so you can't impeach. It was the Democrats that committed the crimes, not your Republican President!"

Mueller's report last week described in vivid detail episodes in which Trump is said to have dispatched allies to fire Mueller, shut down his investigation and lie. The strength of the findings kicked off a struggle among Democrats over what to do now - show restraint and investigate, or try to impeach? The debate now stretches from the Capitol to the presidential campaign trail.

Pelosi, the de facto leader of the party until a presidential nominee is crowned, stuck to her longtime advice to go with investigations and facts, rather than passionate declarations of how to make Trump pay for his conduct.

"We must show the American people we are proceeding free from passion or prejudice, strictly on the presentation of fact," she wrote. She added: "Whether currently indictable or not, it is clear that the president has, at a minimum, engaged in highly unethical and unscrupulous behavior which does not bring honor to the office he holds."

But Democratic leaders are under pressure from some of the party's rising stars and some 2020 presidential contenders to begin impeachment, including from Sen. Elizabeth Warren of Massachusetts and Julian Castro, a former Housing and Urban Development secretary.

Other Democratic candidates, including Sens. Cory Booker of New Jersey and Kamala Harris of California, have suggested it is too soon to initiate impeachment proceedings.

It remains to be seen how many Democrats will get on the impeachment bandwagon. The issue has split the party since the day the new Congress was sworn in. That January night, freshman Rep. Rashida Tlaib, D-Mich., was recorded using a profanity to tell supporters the Democrats were going to impeach Trump.

After Mueller's report was released, the most prominent of the Democratic freshmen, Rep. Alexandria Ocasio-Cortez of New York, signed on to Tlaib's resolution calling for an investigation into Trump's conduct and the question of whether it merits a formal charge in the House.

"Mueller's report is clear in pointing to Congress' responsibility in investigating obstruction of justice by the President," Ocasio-Cortez tweeted.