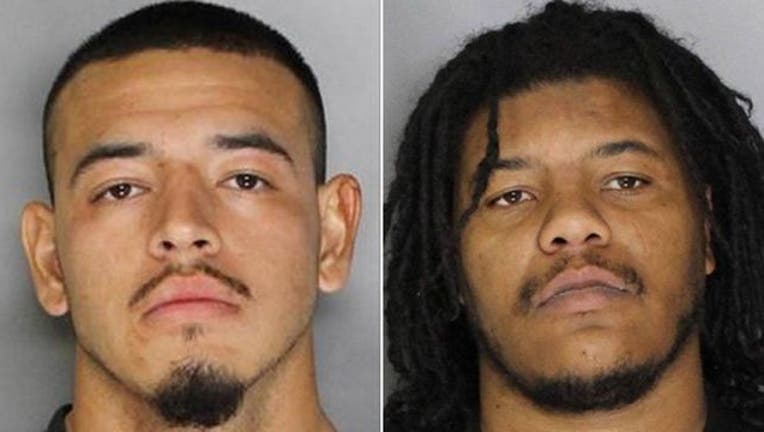 Juan Gomez, left, and Jamaral Lee were arrested after a Sacramento cop was assaulted outside of his cruiser. (Sacramento Police Department)

A California police officer is recovering after authorities said 20-year-old Juan Gomez lured the cop from his cruiser Monday and beat him while 35-year-old Jamaral Lee filmed the assault and shouted encouragement. The unidentified officer was in his patrol car around 12:30 a.m. when authorities say Gomez approached the officer and told him there was a man with a gun in the vicinity, according to a Sacramento Police Department news release obtained by the Sacramento Bee.

“As the officer stepped out of his car, Gomez immediately and violently assaulted him,” the release stated.

Gomez allegedly continued beating the officer, who called for help and was eventually aided by private security guards stationed nearby. Gomez repeatedly tried to remove the officer’s gun from its holster during the attack, police said. Investigators said the officer asked Lee for help multiple times, but he refused, according to FOX40. Lee said he didn’t know Gomez prior to the incident.

“My girlfriend and I were walking [in the area] and we saw a fight,” Lee told FOX40 from jail. “I got out my phone and recorded like an 8-second video…I don’t see why I’m in jail for that, I can do that.”

Lee said he did not encourage the fight, but admits shouting, “You can fight, but don’t grab the officer’s gun!”