CHICAGO - The nation’s largest beauty store chain, Ulta Beauty, will be opening its first batch of shops in more than 100 Target stores next month including seven in the Chicago area.

The new shopping concept will be available in Woodfield, Evanston and Chicago Near North Elston in August. In September, locations will open in Oak Lawn and Chicago Peterson Avenue. Mini-shops in Broadview and Munster will open in October.

As part of the retail powerhouse partnership, Ulta's mini-shops will eventually be expanded to "800 locations in the years to come," according to Target. Its selection of makeup, beauty and fragrance products will also be available on Target's website.

The move reflects a combined effort to drive traffic to both the big-box retailer as well as the national cosmetics company as the economy continues to rebound from the coronavirus pandemic. 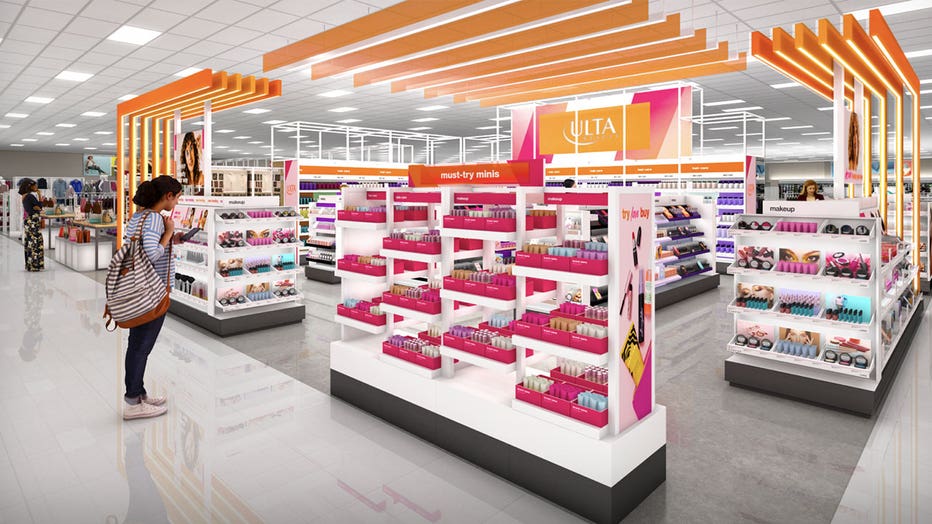 A mock-up of the concept.

"This unique partnership is another way we continue to elevate the guest experience across our multi-category business to drive traffic and preference as we meet guests’ needs in innovative ways," said Christina Hennington, Target's chief growth officer.

Target touted that its shop-in-shop concept, which will be located near the existing Target beauty section and feature more than 50 prestige brands, is "unparalleled."

To gain a competitive edge, the Minneapolis-based retailer also announced that guests will be able to benefit from both Target and Ulta's rewards programs. Both companies should increase their customer base. Combined, Target and Ulta already have a slew of active loyalty program members across – Target Circle and Ultamate Rewards.

The companies first announced the union of the two brands in November 2020. At the time, Target CEO Brian Cornell told reporters that the partnership was the "combination of two winning retailers that have great momentum in the market that can redefine the category."

One month later, Ulta's rival, Sephora, a division of LVMH Moët Hennessy Louis Vuitton SE, announced it would be replacing all cosmetics areas at Kohl’s with 2,500 square foot shops, starting with 200 locations by fall.

Sephora also has plans to expand to at least 850 stores by 2023, the companies previously announced.

Fox News and the Associated Press contribute to this report.