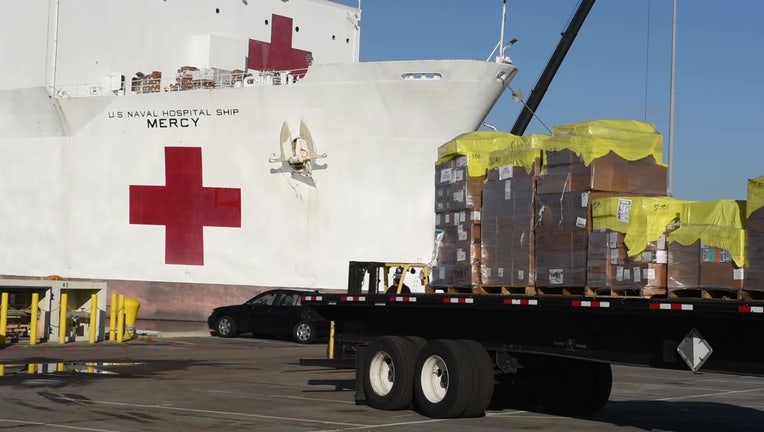 LOS ANGELES - As a U.S. Navy hospital ship steams toward Los Angeles to help relieve the strain of the coronavirus pandemic, those on board are making final preparations.

According to the Pentagon, the USNS Mercy, which was docked in San Diego, will arrive in Los Angeles on Friday to "serve as a referral hospital for non-COVID-19 patients" who are currently hospitalized on land.

"They're telling us to expect a wide range of medical and surgical patients being transferred from local hospitals," Navy Capt. John Rotruck said in a phone interview Thursday with "Fox & Friends." 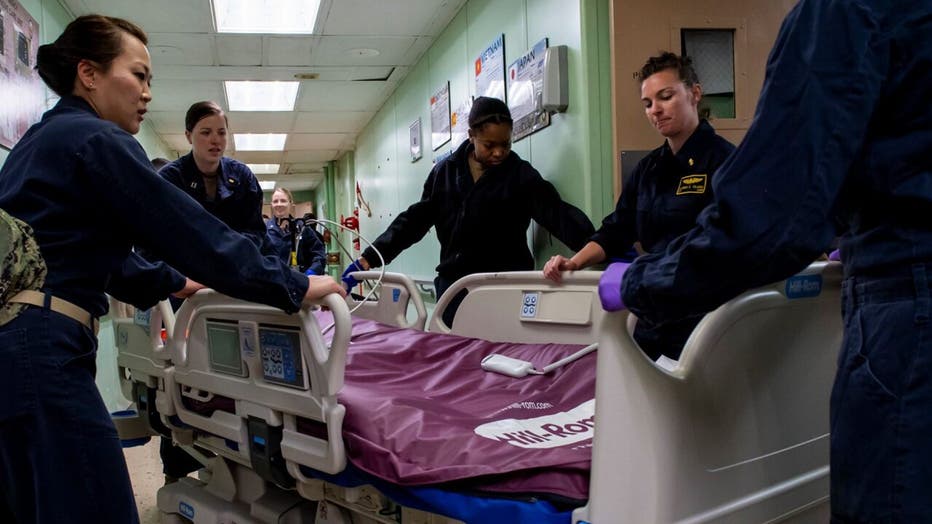 Sailors assigned to the USNS Mercy relocate patient beds after the ship was deployed support of the nation's COVID-19 response efforts, and will serve as a referral hospital for non-COVID-19 patients currently admitted to shore-based hospitals in Los

"Once we get there, we're going to work with FEMA as the lead agency and the state of California local health authorities to take non-COVID 19 patients to act as a relief valve for local hospitals so that they can focus their energy and resources for taking care of coronavirus patients," Rotruck told Fox News. 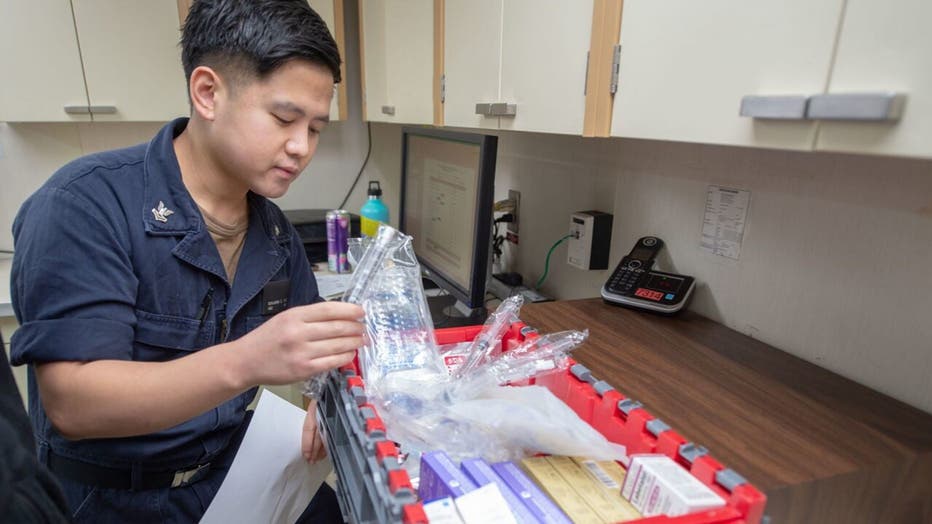 On Wednesday, the Navy released videos and photos of sailors preparing the hospital ship for future patients.

Rotruck told Fox News that the Mercy has "just under 1,000 military staff," together with 76 civilian mariners. According to Rotruck, two-thirds of the staff on board the vessel are medical and another third is non-medical to "support the patient care mission." 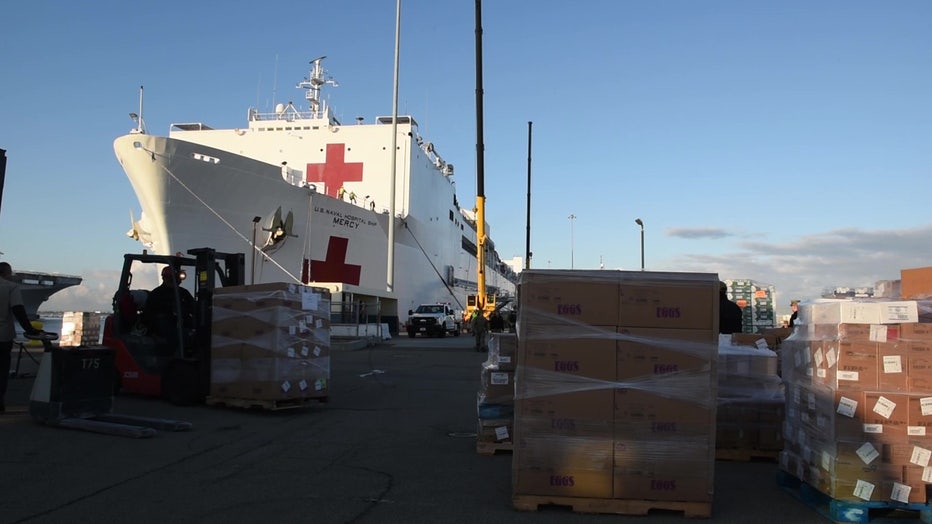 "We are very well equipped to deliver a broad range of medical and physical services to the patients who come to us," he told "Fox & Friends."

Additional images released by the Navy on Wednesday show sailors preparing for the mission by practicing with IV needles during a venipuncture training and sterilizing surgical equipment.

The features onboard the Mercy include 12 fully-equipped operating rooms, a 1,000 hospital beds, digital radiological services, a medical laboratory, a pharmacy, an optometry lab, a CAT-scan and two oxygen-producing plants.

Sailors assigned to the USNS Mercy relocate patient beds after the ship was deployed support of the nation's COVID-19 response efforts, and will serve as a referral hospital for non-COVID-19 patients currently admitted to shore-based hospitals in Los

The Navy's hospital ships – Mercy and sister ship on the East Coast, USNS Comfort – are equipped with a helicopter deck capable of landing large military helicopters and also have side ports to take on patients at sea.

USNS Comfort is deploying to New York, an epicenter of the nation's coronavirus crisis.

When fully operational, the hospital ships have a crew of about 71 civilians and up to 1,200 Navy medical and communications personnel, depending on the mission.

The Mercy, which was originally bound for Seattle before receiving orders to go to Los Angeles, has made three 150-day deployments in recent years, in 2015, 2016 and 2018, according to the Navy. 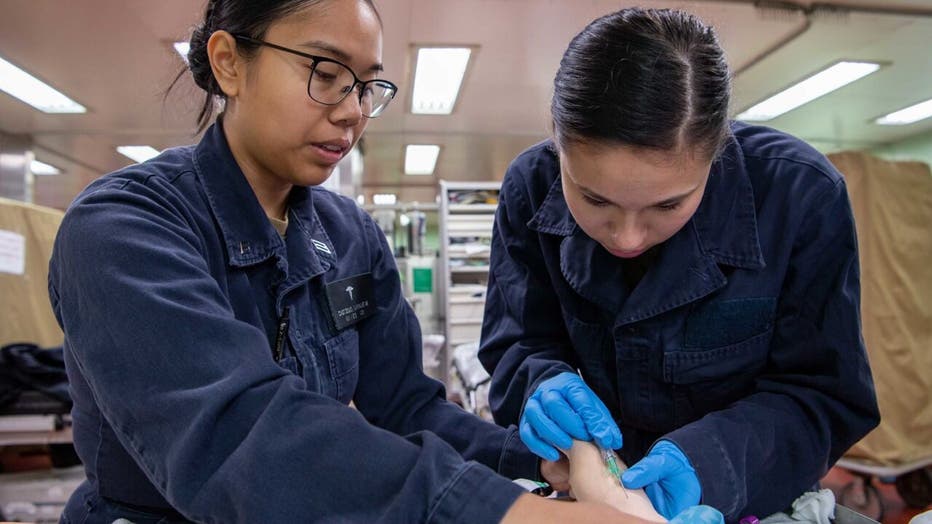 Larraine Castimo, from Orosi, Calif., and Alexandria Loyola, from Castlerock, Colo., practice administering an IV needle during a venipuncture training aboard USNS on Wednesday. Mercy deployed in support of the nation's COVID-19 response effort. (U.S

California Gov. Gavin Newsom sent a letter to President Trump last week “requesting the immediate deployment of the USNS Mercy Hospital Ship to the Port of Los Angeles through September 1, 2020.”

Rotruck told "Fox & Friends" that the mission to California is "very personal and special" for all the sailors on board.

"We're very excited and enthusiastic about this mission, and excited to get there and get started," he said Thursday.

As of Thursday morning, the Golden State had 3,169 confirmed COVID-19 cases and 67 deaths attributed to the virus, according to a tally by Johns Hopkins University.