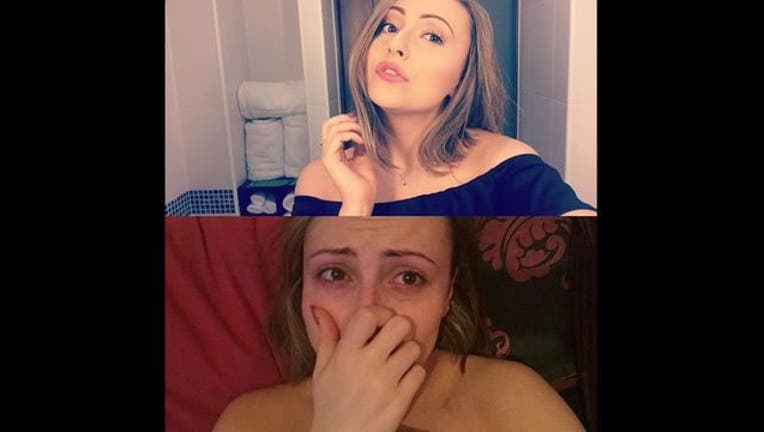 (KMSP) - Amber Smith, a 22-year-old from Rugby, England has dealt with anxiety and panic attacks since she was a teenager, but she was officially diagnosed three years ago. To shed light on the reality of panic attacks, she uploaded two images to her Facebook page: The top is how she presents herself on social media, the bottom is a photo of her shortly after she suffered a panic attack.

"Top picture: What I showcase to the world via social media. Dressed up, make up done, filters galore. The ‘normal’ side to me.

Bottom picture: Taken tonight shortly after suffering from a panic attack because of my anxiety. Also the ‘normal’ side to me that most people don’t see."

"I'm so sick of the fact that it's 2016 and there is still so much stigma around mental health. It disgusts me that so many people are so uneducated and judgemental over the topic," she wrote below the images on Facebook. "They say that 1 in 3 people will suffer with a mental illness at some point in their life. 1 in 3! Do you know how many people that equates to worldwide?! And yet I've been battling with anxiety and depression for years and years and there's still people that make comments like 'you'll get over it', 'you don't need tablets, just be happier', 'you're too young to suffer with that'"