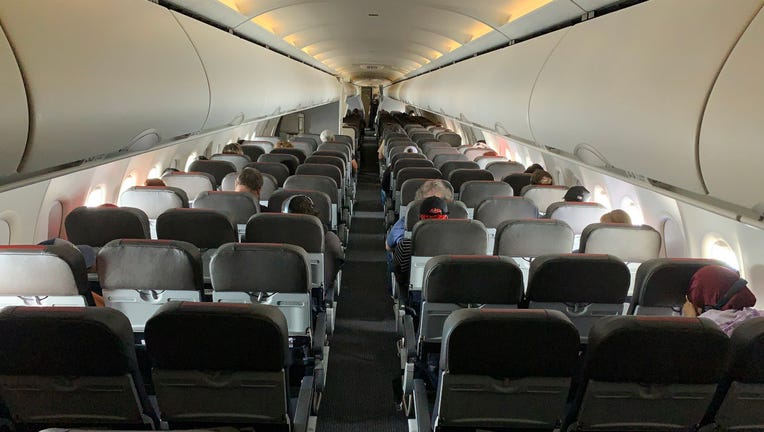 Many of the seats aboard an American Airlines flight from New Orleans to Charlotte, North Carolina are seen on May 15, 2020. (Chris Graythen/Getty Images)

A woman was reportedly kicked off an American Airlines flight last week because her mask was deemed “offensive” by a flight attendant.

Arlinda Johns, from South Florida, was on her way to Illinois when she boarded a plane wearing a mask that said “F--- 12” and a T-shirt that said “Black Lives Matter,” she told Florida’s Local 10 station.

A flight attendant reportedly asked Johns -- an activist who believes in defunding and abolishing the police -- to cover her mask. Johns did, saying in a Facebook Live video later: "Everything she asked me to do, I did."

But soon after, the flight attendant reportedly returned to Johns’ seat.

After the flight attendant went to the front of the plane, it returned to the gate and Johns was reportedly asked to deplane.

Johns took a Facebook Live video that showed her being asked to get off the plane and being escorted out of the airport by officers, according to Local 10.

American Airlines did not immediately respond to Fox News’ request for comment.

However, the airline did tell Local 10 that Johns “refused to follow crew member instructions to remove or cover a face mask with offensive language and although the passenger initially complied, they later continued to display the inappropriate language. After arriving at the gate, the passenger was asked to deplane.”

The airline also told the station that it is “looking into” the event, but that it is refunding the portion of Johns’ ticket that she didn’t use.

Johns told Local 10 that she hasn’t heard from the airline other than a response to one of her tweets, but that she has spoken to an attorney.

She reportedly ended up having to rent a car and drive to Illinois in order to reach her destination.