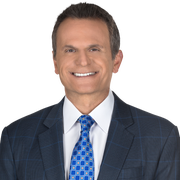 Lou Canellis shares his enthusiasm about sports with Chicagoans every day on FOX 32 News at 5 p.m. and 9 p.m.

He has followed local teams his entire life and has an extensive sports background.

In addition to his work on FOX Chicago, Canellis is living the dream with the Chicago Bears. He is the TV host for all five of the TV shows the Bears own and produce. Canellis anchors Bears Game Day Live and Bears Game Night Live on FOX Sunday mornings and Sunday nights, along with Bears Recap and Bears Blitz on Mondays, Wednesdays, and Thursdays on Comcast Sportsnet.

Canellis has been going to Bears game since he was four-years-old, and has been a season ticket holder since he was six-years-old. Sweet Lou's expertise on the Bears can also be heard on the Roe Conn Show on WLS Radio, 890AM, Mondays and Fridays.

Canellis' first dream job was as a member of the Chicago Bulls broadcasts on TV and radio. Canellis worked on the sidelines and is well-known for his post-game chats with Michael Jordan.

A Loyola University graduate, Canellis considers himself a "South Sider," having been born and raised in Oak Lawn.