Chicago Bears star linebacker Roquan Smith is requesting a trade, saying the team has not negotiated in good faith for a contract extension. FOX 32's Lou Canellis breaks down what it means.

The Bears All-Pro linebacker released a statement Tuesday to NFL.com requesting a trade, saying the team that took him in the first round of the 2018 NFL Draft has not negotiated in good faith for a contract extension.

Smith, who does not have an agent, said he has been trying to negotiate an extension with the organization since April, but the Bears "focus has been on trying to take advantage of me."

"Unfortunately, the new front office regime doesn’t value me here," he wrote. "They’ve refused to negotiate in good faith. Every step of this journey has been ‘take it or leave it.’ The deal sent to me is one that would be bad for myself, and for the entire LB market if I signed it."

The Bears made big changes after going 6-11 last season and missing the playoffs for the ninth time in 11 years. They fired general manager Ryan Pace and coach Matt Nagy and replaced them with Ryan Poles and Matt Eberflus.

Smith participated in voluntary and mandatory offseason workouts. He reported to training camp on time and was placed on the physically unable to perform (PUP) list in July.

"I wanted to be a Bear for my entire career, help this team bring a Super Bowl to our city," Smith said in the message. "However, they have left me no choice that to request a trade that allows me to play for an organization that truly values what I bring to the table." 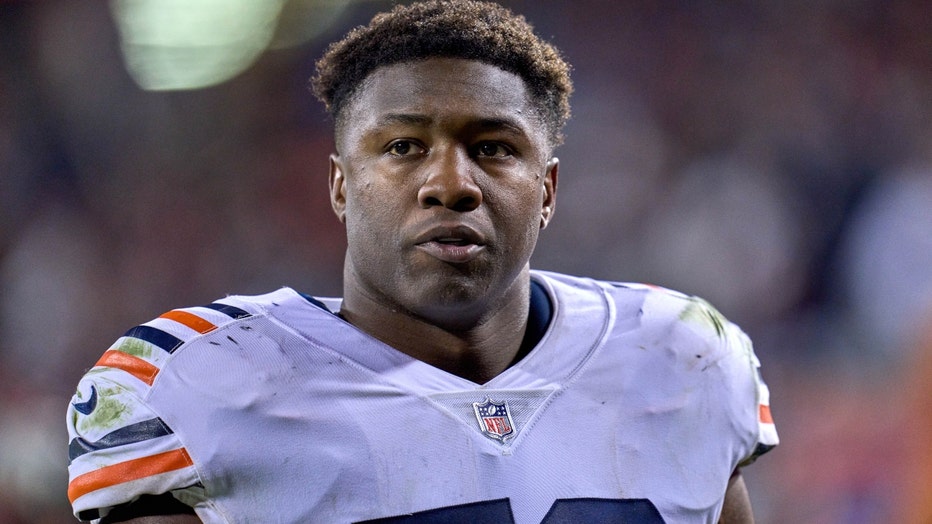 Chicago Bears inside linebacker Roquan Smith looks on during a game between the Chicago Bears and the Minnesota Vikings on December 20, 2021, at Soldier Field in Chicago, IL. (Robin Alam/Icon Sportswire via Getty Images / Getty Images)

The 25-year-old Georgia native apologized to fans for the trade request, calling it "deeply painful", but left the door open for the McCaskey family to "salvage" a path that sees him stay in Chicago.

"But as of right now, I don’t see a path back to the organization I truly love," he wrote.

Chicago Bears general manager Ryan Poles plans to continue to work for a contract extension with Smith instead of his request to be traded.

Smith, who is under contract through the 2022 season, is staging a "hold-in" and attending practices without actually practicing until he gets an extension, but Tuesday he made public an official request for a trade.

"Right now my intentions are to sign Roquan to this team," Poles said after the Bears held a Tuesday practice at Soldier Field. "And we’re going to take it day by day. At the end of the day we’ve got to do what’s best for this organization. But my intentions are to make sure Roquan Smith’s on this team."

Smith practiced with the team throughout the offseason voluntary and mandatory work, but was not participating on the field when training camp began.

The Bears plan to use Smith as a weakside linebacker in their new 4-3 scheme.

"I’ll double down on what I’ve said before: My feelings for Roquan haven’t changed at all," Poles said. "I think he’s a very good football player. I love the kid. I love what he’s done on the field, which makes me really disappointed with where we’re at right now."

"I thought we’d be in a better situation, to be completely honest with you."

Smith was on the sideline at the team’s Soldier Field practice Tuesday.

Poles said the fact Smith does not have an agent makes a deal tougher to achieve.

"It’s difficult," Poles said. "There’s emotions involved and it’s tough. It’s a very unique situation that we’ve had to deal with and I thought we’ve done a pretty good job, which again that’s why I’m a little disappointed we’re at this spot."

The Bears continue working at practice with Matthew Adams as the weakside linebacker. Eberflus said he speaks almost daily with Smith despite his "hold-in" status.

"There’s few things that surprise you," Eberflus said. "You take it for what it is and you move forward, and that’s what you do. So I really didn’t have any reaction. I was disappointed in that but that’s where it is right now.