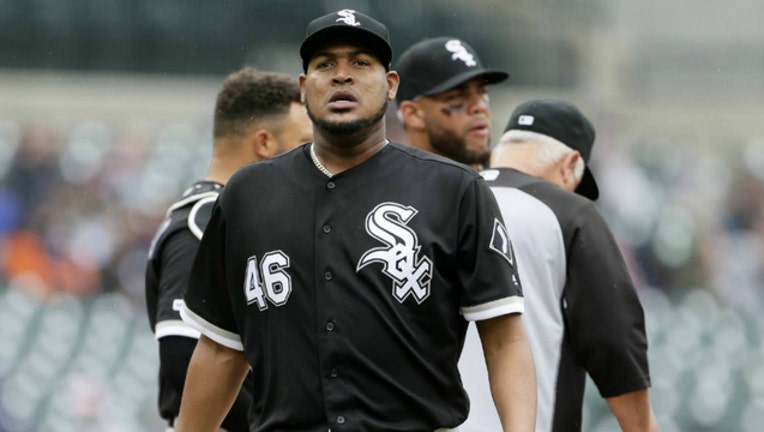 "Have some fun," the manager told them. "When you get into a losing streak, it gets hard to do that, but you aren't going to play good baseball if you aren't enjoying yourself."

The message worked as the Tigers ended a five-game losing streak with a 9-7 win over the Chicago White Sox. Detroit set season highs for hits (14) and runs.

"It was great, because he reminded us that this is a 162-game season," third baseman Jeimer Candelario said. "If you aren't having fun, it is going to turn into a really long year."

"When those two guys get going, it can really boost the offense," Gardenhire said. "We need everyone to help out, but Nick and Miggy are the key to everything.

Grayson Greiner had a career-high three hits and two RBIs for the Tigers.

With the score tied at 7, Greiner led off the eighth with a single and moved up when Carson Fulmer (0-1) hit both JaCoby Jones and Josh Harrison with pitches.

Castellanos and Cabrera put the Tigers ahead with back-to-back sacrifice flies.

"He got into a little trouble, tried to get us out of it and it didn't work out," White Sox manager Rick Renteria said. "They started out with a bloop hit, and then the next two guys were trying to bunt and he lost his command a little bit."

Drew VerHagen (1-0) picked up the win after recording the last out of the eighth inning. Shane Greene pitched the ninth for his ninth save in nine attempts.

The Tigers trailed 5-4 going into the bottom of the seventh, but Castellanos ended Nova's day with a game-tying double with one out, and Cabrera greeted Kelvin Herrera with an RBI single.

Niko Goodrum doubled and the White Sox loaded the bases by intentionally walking Candelario. Dustin Peterson hit into a force at second, scoring Cabrera with Detroit's seventh run, but Wellington Castillo tied it with a two-run homer in the eighth.

The Tigers took a 1-0 lead in the second inning when Gordon Beckham singled and scored on Greiner's double. The same pair teamed up again in the fourth, with Beckham singling, stealing second and scoring Detroit's second run on Greiner's single.

Chicago made it 2-1 in the fifth, then took a 4-2 lead with three unearned runs in the sixth. With two out, Goodrum misplayed Yonder Alonso's grounder to first and Eloy Jimenez followed with his third home run.

"When I hit it, I thought the wind was going to stop it, but I hit it really good," Jimenez said. "This is a big field."

Tim Anderson singled, stole second and went to third on Greiner's throwing error. Castillo hit a grounder to short and Beckham misplayed it for Detroit's third error of the inning as Anderson scored.

"I told our guys to forget about it," Gardenhire said. "It took all of them to make three errors in an inning. I did that once by myself."

Detroit made it 4-all in the sixth on three singles and a wild pitch. Ryan Cordell homered to put Chicago ahead 5-4 in the seventh.

Tigers: Put OF Christin Stewart on the 10-day injured list with a left quad pull sustained on Wednesday night and recalled 1B Brandon Dixon from Triple-A Toledo.

Cordell was recalled from Triple-A Charlotte before the game, got the start in right field and had three hits, including the seventh-inning homer that gave Chicago a 5-4 lead.

"He had a really nice day today," Renteria said. "We battled all game, and he was a big part of the fight. This is a good start for him, and we'll see how he continues."

Cabrera came into the game with a .389 batting average in 13 games on his birthday and doubled in the first inning before his RBI single in the seventh and sacrifice fly in the eighth.