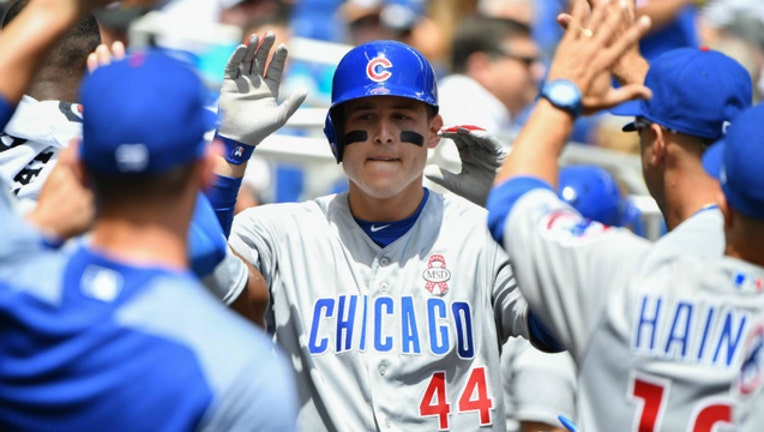 Anthony Rizzo #44 of the Chicago Cubs celebrates a home run in the dugout in the second inning during Opening Day against Miami Marlins at Marlins Park on March 29, 2018 in Miami, Florida. (Mark Brown/Getty Images)

CHICAGO - The Chicago Cubs picked up their $16.5 million option for Anthony Rizzo on Saturday, bringing back the popular first baseman after he struggled during the pandemic-shortened season.

The 31-year-old Rizzo hit just .222 this year for his lowest batting average since his first year in the majors in 2011. But he has been one of the majors’ most productive sluggers since he was acquired in a 2012 trade with San Diego. He’s also a key clubhouse leader for the NL Central champions.

Rizzo would have been owed a $2 million buyout had the Cubs declined his option. The team could try to extend his deal to create some salary relief for next season after losing money this year because of the pandemic.

The Cubs also declined their $3.5 million option for infielder Daniel Descalso, who missed last season because of a left ankle sprain. The 34-year-old Descalso is owed a $1 million buyout.

Chicago declined left-hander Jon Lester’s $25 million mutual option on Friday, but each side has left the door open for a possible return.

Rizzo hit at least 25 homers and drove in at least 101 runs for four consecutive years from 2015-18. He has 228 homers in nine seasons with the Cubs, ranking eighth in franchise history.

Rizzo hit 11 homers and 24 RBIs in 58 games this year. He is a finalist for his fourth Gold Glove Award.

Advertising: Download the FOX Super 6 app for free and you can win a $100,000 jackpot! Download here now.