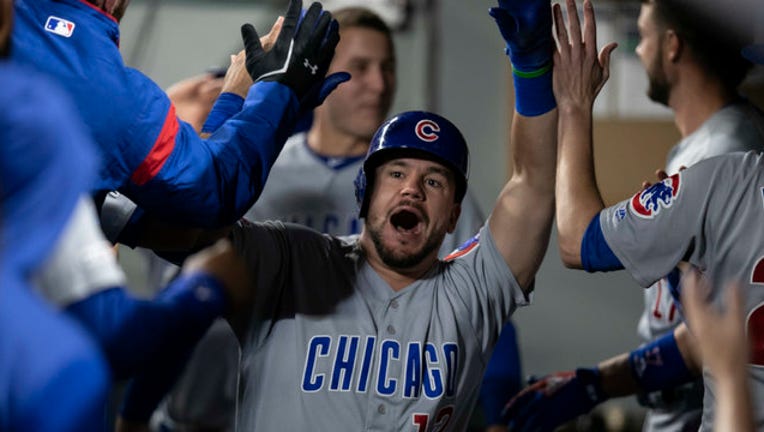 Kyle Schwarber of the Chicago Cubs celebrates in the dugout after hitting a two-run home run off of relief pitcher Brandon Brennan of the Seattle Mariners during the eighth inning at T-Mobile Park on April 30, 2019. (Stephen Brashear/Getty Images)

MILWAUKEE (AP) - Kyle Schwarber hit a grand slam and a three-run homer to power the Chicago Cubs past the Milwaukee Brewers 11-4 on Sunday, averting a three-game sweep in a matchup of NL Central contenders.

Schwarber crushed a first-pitch slam deep into the second deck in right field off starter Zach Davies (8-4) with one out in the second inning for his 23rd home run of the season. The slugger took Davies deep again in the fourth with an opposite-field shot to make it 7-0.

After the Brewers cut it to 7-3 in the fifth, Schwarber's infield single with two outs in the sixth kept the inning alive for pinch-hitter Victor Caratini, who hit a three-run homer off Milwaukee reliever Jeremy Jeffress.

Christian Yelich's run-scoring double in fifth, which extended his hitting streak to 16 games, chased Cubs starter Jose Quintana, who failed to get the win despite being staked to a seven-run lead. Quintana gave up four hits and three runs in 4 2/3 innings.

Brad Brach (4-3) retired the only batter he faced for the victory.

Davies was coming off his worst start, when he allowed seven runs in four innings of a 14-6 loss to Cincinnati on Tuesday. This time, he gave up seven runs and four hits in five innings. He had permitted only one earned run in 12 innings against the Cubs this season prior to Sunday.

Cubs: LHP Cole Hamels, on the 10-day injured list with a left oblique strain, gave up three runs and three hits, including two first-inning homers, over three innings in a 59-pitch rehab outing for Triple-A Iowa. "We'd like to believe that his next start would be with us," manager Joe Maddon said before the game.

Brewers: RHP Corbin Burnes, on the IL with right shoulder irritation, pitched one shutout inning with a strikeout for Triple-A San Antonio on Saturday night. "His next outing will be two innings and then we'll decide after that what's going on," manager Craig Counsell said. . RHP Jimmy Nelson, on the IL with fluid in his right elbow, was scheduled to pitch two innings for San Antonio on Sunday.

Brewers: Counsell hadn't announced who will take the mound Tuesday night at Oakland against Chris Bassitt (7-5, 4.09 ERA) in the opener of a three-game series.