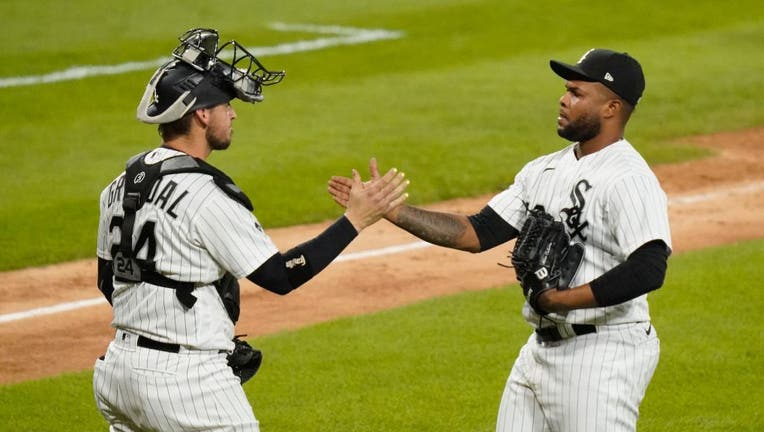 Yasmani Grandal #24 and Alex Colome #48 of the Chicago White Sox celebrate their team's 3-1 win over the Minnesota Twins at Guaranteed Rate Field on September 14, 2020 in Chicago, Illinois. (Photo by Nuccio DiNuzzo/Getty Images)

CHICAGO - Adam Engel delivered a tiebreaking pinch-hit single in the eighth inning, and the Chicago White Sox beat the Minnesota Twins 3-1 on Monday night to increase their lead in the AL Central.

Chicago opened its pivotal four-game set against Minnesota with its ninth win in 10 games. The White Sox (31-16) moved two games ahead of the second-place Twins (30-19).

Twins reliever Taylor Rogers (1-3) walked Yoán Moncada and Luis Robert with no outs in the eighth. Engel then made it 2-1 with a bouncer up the middle.

The White Sox have relied on their power all year, but Engel faked a bunt before swinging away.

“The shortstop vacated again so I pulled back and I just tried to hit a ground ball up in the middle,” he said.

White Sox manager Rick Renteria gave all the credit to Engel for executing.

“These guys are aware when the opposition puts on a crash play or the wheel play, they have the autonomy to pull the bat back,” Renteria said. “You see it, you do what you do. He did a great job. That’s more of his execution. He didn’t try to do too much with the pitch. He just tried to put the ball in play.”

After Nick Madrigal lined out, Tim Anderson added an RBI double off the fence in left. Anderson had three hits, strengthening his position in the race for the AL MVP award.

“This is the moment that you want to be in,” Anderson said before the game. “It’s playoff ball, really.”

White Sox reliever Gio González retired the first two batters in the eighth before issuing consecutive walks. Alex Colomé relieved González and walked Josh Donaldson to load the bases for Nelson Cruz, who grounded out to leave the bases loaded for the second time in the game.

Minnesota went 2 for 16 with runners in scoring position and left 15 runners on base. It had won three in a row.

Colomé (2-0) also worked around another adventure for left fielder Eloy Jiménez in the ninth.

Byron Buxton hit a line drive by Jiménez that went to the fence. Jiménez put his hands up because he thought the ball was lodged at the bottom of the wall. Buxton didn’t hesitate and ran around the bases for what appeared to be an inside-the-park homer.

After a replay review, the home run was overturned and Buxton went back to second for a ground-rule double. Colomé recorded the final out by striking out Jake Cave looking.

“No, I mean it almost looked like it was leaning up against the fence,” he said. “I’m sure it wasn’t wedged in there too tightly but in this case it didn’t matter. All that matters is what it’s ruled and we kind of have to play it.”

Jiménez has struggled at times in left. Even with veteran outfielder Jarrod Dyson on the bench, Renteria decided to keep Jiménez in the game because he was due up in the bottom of the ninth.

The White Sox are off to their best start since they were 31-15 in 2006. They are trying for their first division title since 2008.

“Playing these games late in the season against another playoff team, I think it essentially gets that feeling of what playoff baseball is going to be like,” Engel said.

The Twins put the leadoff hitter on in the first six innings. Cease struck out Willians Astudillo with runners at first and third to end the fourth.

“We had plenty of opportunities,” Baldelli said. “Our at-bats were actually pretty good when we had the opportunities with the runners in scoring position. They probably weren’t as good, we just weren’t as good to get it done when guys were out there waiting for a hit.”

The Twins recalled infielder Travis Blakenhorn, who was on their taxi squad. Blakenhorn split time between Single-A Ft. Myers and Double-A Pensacola in 2019.

Left-hander Devin Smeltzer was optioned and moved to the taxi squad. Smeltzer started one game for the Twins and was 2-0 with a 6.75 ERA.

Twins: INF Marwin Gonzalez was scratched due to an illness. ... INF Miguel Sanó was sidelined by a stiff neck. “Miggy is not at the point where he can turn his head enough,” Baldelli said. ... OF Eddie Rosario was also out of the lineup after colliding with Buxton in the outfield on Sunday and injuring his left elbow. He is day to day.

Randy Dobnak (6-3) is Tuesday’s scheduled starter for the Twins. The right-hander will try to bounce back after struggling in his previous outing. Dane Dunning (1-0) gets the ball for the White Sox.