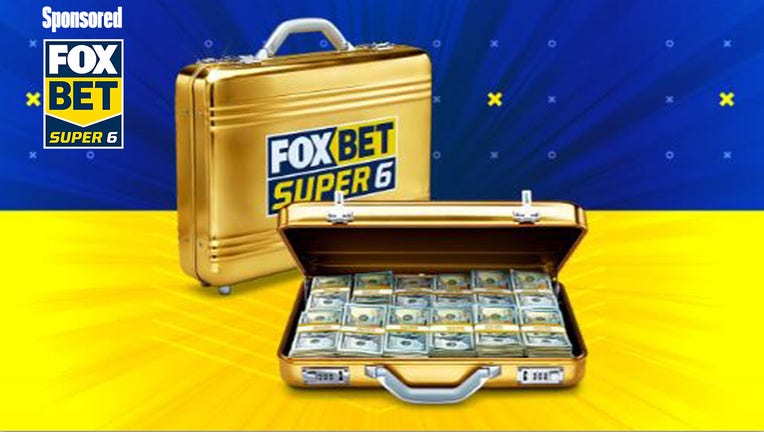 Ready for your chance to win $100,000 of Terry's money? Here's how you can score big with FOX Bet's Super 6 NFL Sunday Challenge! (FOX Sports)

Football fans have all been waiting for this time of year since the last piece of confetti was swept up after Super Bowl LVI — the first full week of the NFL regular season.

Congratulations, friends. We made it.

Going without the NFL from February until September always tests our patience, but somehow we power through. And this year, like last, you can play FOX Bet Super 6 for your chance to win $100,000 of Terry's money. We're talking Terry Bradshaw's cold-hard cash.

FOX Bet Super 6 is a free-to-play contest where you pick the winners of all six marquee games with their margins of victory for a chance to win $100,000 in our NFL Sunday Challenge. Just download the FOX Super 6 app on your phone or mobile device, make your picks and submit your selections. So forget suiting up in football pads and cleats because all you need to play our game is the Super 6 app and your mobile device.

And because FOX is Football, we’re giving you our predictions for this weekend’s Super 6 marquee games.

Ready to play? Let’s get ready for kickoff.

The Trey Lance era in San Francisco starts Sunday. After the 49ers drafted him with the third overall pick in 2021, the writing was on the wall. Quarterback Jimmy Garoppolo's time in the Bay was coming to a close.

As hard as they tried, they couldn't get rid of Jimmy G. So now, instead of being the starter, he'll be backing up Trey on a $6.5 million fully-guaranteed contract. That's our long-winded way of saying good luck to Lance but yikes to how it all unfolded.

The Bears might not fare much better on the other side of the ball. Their starting QB is a young Justin Fields, who only passed for 1,870 yards last season with seven passing TDs and 10 interceptions due to injuries and a bad offensive line. As a matter of fact, the Bears allowed a whopping 58 sacks in 2021. Guys, 58! That was the most in the league last year.

Let's just say that we don't expect too many fireworks from either of these offenses. And when it comes to our prediction for this game, look for San Francisco to pull away late.

We have two NFC South teams on a quest to prove that there's another squad in the division other than Tom Brady's Buccaneers. That's a task we're glad we don't have to tackle.

The Dirty Birds are without Calvin Ridley (suspension), and veteran QB Matt Ryan is now on the Indianapolis Colts. So who knows what to expect from the offense in the A with these two key pieces missing and Marcus Mariota leading the charge.

The Saints, though, are returning Jameis Winston, who'll be back after tearing his ACL in 2021. Before he went down, the Saints' season looked relatively promising. And according to critics and various metrics, the Saints have one of the best defenses in the League.

So mix some Winston motivation in with a little N.O. voodoo, and we've got ourselves a Saints' victory cooking.

Prediction
Saints by 9 to 10

So let's just focus on this game.

Jacksonville has lost 17 consecutive road games. Have you ever heard the expression that something hasn't happened in "a month of Sundays?" Well, this is the kind of losing streak that basically fits that bill.

On the Commanders' side, they have star wide receiver Terry McLaurin, but what other offensive weapons can they boast? Carson Wentz — the top draft pick-turned journeyman with a quarterback rating of 54.7 in 2021? The same Wentz who is starting on his third different team in Week 1 for the third year? To put it gently, in Wentz, we don't trust when it comes to a season-long outlook.

However, we're going to ride with Wentz's experience this weekend and the fact that he has one of the league's top receivers in McLaurin on his side. That should be enough to get past this up-and-coming Jaguars team.

Prediction
Commanders by 7 to 8 points

The Eagles are the team to watch — not only in this game but for the entire season. In 2022, they drafted studs out of Georgia like tackle Jordan Davis and linebacker Nakobe Dean to beef up their defense. And Jalen Hurts, A.J. Brown and DeVonta Smith highlight what we expect will be an electric offense.

And then there’s Detroit. Even in their down years — and there have been more than a handful — the Lions have been known to make competitive games out of matchups where oddsmakers have counted them out. Maybe that is why they are getting a ton of love from bettors this offseason. Or maybe it's the Hard Knocks effect. Either way, don't expect any grand gestures of courage out of these Lions on Sunday.

Prediction
Eagles by 9 to 10

In his 15 years as a head coach, Steelers coach Mike Tomlin has never had a losing regular season. And he'll need to conjure up all the lessons he has learned throughout his career to navigate his first without Ben Roethlisberger under center.

Cincy head coach Zac Taylor, on the other hand, navigated 2021 for his young team quite nicely. The Bengals didn't end up hoisting the Lombardi, but they overachieved in a year when they had some of the longest odds to win it all.

And remember, Cincinnati swept the season series between these two teams in 2021. That has to be worth some stripes for the Bengals going into 2022.

They say Super Bowl luck tends to rub off even on the losing team. Actually, no one says that. We just made that up, but let's just go with it as our new motto for the season.

Prediction
Bengals by 9 to 10

At +275, Minnesota has the second-best odds behind Green Bay (-189) to win the NFC North at FOX Bet. The next-best team is Detroit, at +900. So that should tell you that bookmakers think the Vikings can compete with GB in the North. And it starts with this game.

On offense, Green Bay doesn’t have Davante Adams anymore, but they still have Mr. MVP, Aaron "Nicolas Cage" Rodgers. Their defense, though, finished 2021 ranked 22nd in DVOA. If the Pack want to beat rival Vikings, they'll need a little more D. While Green Bay's defense is projected to be much better than in years past, we need to see it on the field first.

On the flip side, when you look at the Vikings' offense, they have Justin Jefferson — arguably one of the best wideouts in the league. He has racked up 3,016 receiving yards in his first two NFL seasons. And quarterback Kirk Cousins has thrown a touchdown pass in 30-straight regular season games. That's the longest active streak in the NFL. So Kirk Cousins-to-Justin Jefferson could be the call we hear on Sunday that lifts the Vikes over the Packers.

Prediction
Vikings by 5 to 6

Now it's your turn to make some picks that could potentially make your pockets $100,000 fatter. So, be sure to download the FOX Super 6 app, make your Sunday Challenge selections and submit them before the first games kick off on Sunday.

And remember, use the hashtag #EricaSuper6 on social media, so we can celebrate together as our picks start hitting!