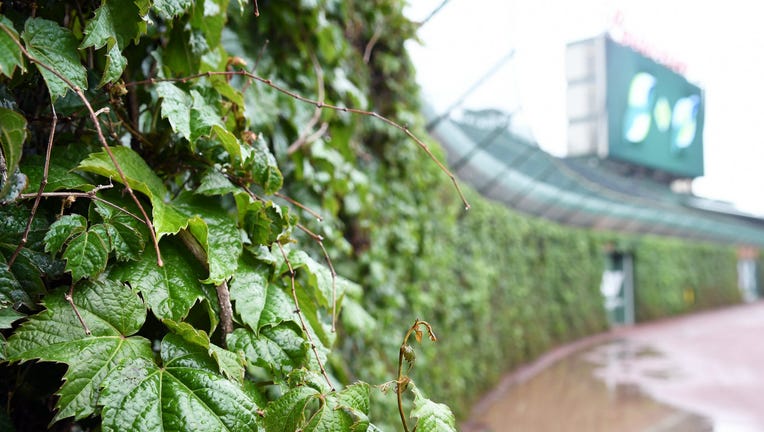 The ivy soaks up the rain at Wrigley Field in Chicago, IL. (Nick Wosika/Icon Sportswire via Getty Images / Getty Images)

CHICAGO - The Chicago Cubs are counting on Yu Darvish to help them avoid a playoff sweep by the Miami Marlins.

They are going to have to wait another day to see if Darvish can deliver.

Game 2 of the NL wild-card series between the Cubs and Marlins was postponed Thursday because there was rain in the forecast.

Miami was taking batting practice under sunny skies when the game was pushed back. The teams will meet Friday, with rookie Sixto Sánchez pitching for the Marlins. If Game 3 is needed, it would be played Saturday. Miami won 5-1 in the opener on Wednesday.

The 34-year-old Darvish was a steady presence for the Cubs throughout the pandemic-shortened season, joining the NL Cy Young Award conversation. A four-time All-Star with Texas, he tied Cleveland’s Shane Bieber for the major league lead with eight wins and was second in the NL to Cincinnati’s Trevor Bauer with a 2.01 ERA.

“Last year, you could really see it click for him, just kind of getting after it a little bit and not being so fine,” veteran Jon Lester said. “I think he felt comfortable with where he was at, physically, getting situated here in Chicago. You could really see him go out there with a peace of mind and just compete and pitch. When you allow a person with how much talent he has to do that, you’re seeing what you could get.”

The Cubs are getting exactly what they expected when they signed Darvish to a $126 million, six-year deal prior to the 2018 season. It just took longer than anticipated.

He struggled through elbow and triceps injuries in his first season-and-a-half in Chicago. But he started pitching like his old self down the stretch last year. And he is a big reason why the Cubs are in the postseason for the fifth time in six years after missing out in 2019.

A sharp outing by Darvish could extend the series and give Lester at least one more start at Wrigley Field as a member of the Cubs. The team holds a $25 million option on the five-time All-Star, who signed a six-year, $155 million deal prior to the 2015 season.

“If this is it here, this is it,” Lester said. “I have to move on with it. The organization will definitely move on. You see it over the years. If somebody leaves or goes down, you fill it in with another person. I’ve definitely appreciated everything this organization has done for me. And I hope it’s not it. I hope we can figure something out for next year, and these conversations are null and void.”

The Marlins weren’t expected to make the playoffs — not after losing 105 games in 2019. A coronavirus outbreak at the start of the season sidelined more than half the team. Yet here they are, in position to advance in their first playoff appearance since winning the 2003 World Series.

The Marlins will have one of baseball’s top prospects on the mound for Game 2. The 22-year-old Sánchez debuted Aug. 22 and posted a 3.46 ERA in seven starts.

Miami could have gone with Pablo Lopez in Game 2. But Mattingly wanted to make sure Sánchez pitched in the series.

“I felt like his stuff is dynamic enough that he can dominate a game if he’s on,” Mattingly said. “We didn’t want to have a scenario where we don’t win (Wednesday) and we have him lined up for Game 3 and you don’t ever get to see him.”

The health of outfielder Starling Marte remains an issue for Miami. He wasn’t in the starting lineup Thursday, but Mattingly had not ruled out using him after a hand specialist confirmed he had a small nondisplaced fracture of the bone running between his left pinky and wrist.

Marte was fitted for a protective brace and was to undergo additional treatment to address the swelling. He was hit by a fastball in the ninth inning Wednesday.