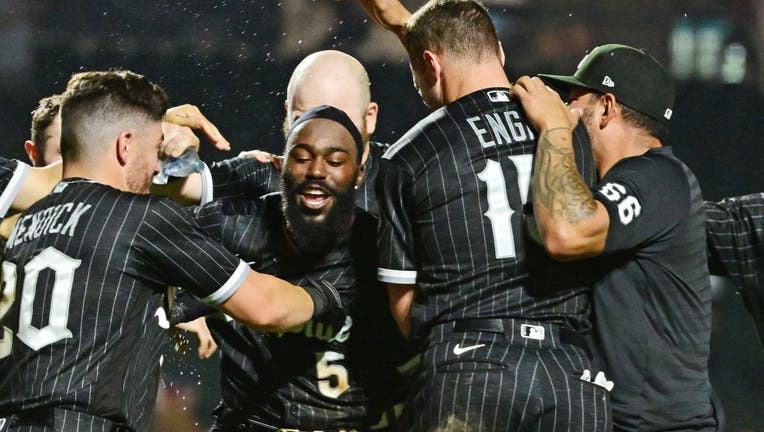 Josh Harrison #5 of the Chicago White Sox celebrates with teammates after hitting a walk-off single in the 12th inning to defeat Toronto Blue Jays 7-6 at Guaranteed Rate Field on June 21, 2022 in Chicago. (Photo by Quinn Harris/Getty Images)

CHICAGO - After all the twists and turns on a hot, muggy night in Chicago, Josh Harrison wore a big smile on his face as he looked back on his winning hit.

"Those are fun games to be a part of, especially when you win," he said.

Harrison hit a game-ending single with two outs in the 12th inning, and the White Sox topped the Toronto Blue Jays for a wild 7-6 victory on Tuesday.

Luis Robert matched a career high with four RBIs and made a sliding grab in center field in the top of the 12th, helping the White Sox (33-33) win for the sixth time in eight games. The reigning AL Central champions returned to .500 for the first time since beating the crosstown Cubs on May 29.

"Those are the type of ballgames that will get you into the playoffs at the end of the year," said Dylan Cease, who struck out 11 in six dominant innings.

Vince Velasquez (3-3) worked two innings for his first win since May 6. He committed a balk before his first pitch, setting up Raimel Tapia’s tiebreaking single in the 11th, but retired the Blue Jays in order in the 12th.

With runners on first and second in the bottom half, Harrison drove in José Abreu with a liner to center off rookie Matt Gage (0-1). Harrison also faced Gage on Monday night, fouling out to the catcher on the second pitch of the at-bat.

"Baseball’s a game where the more you see somebody, the more familiar you can be," Harrison said, "even if it’s just a couple pitches the night before."

Alejandro Kirk homered and drove in two runs for Toronto, which lost for the fifth time in six games. Bradley Zimmer made a memorable catch in center field, and Vladimir Guerrero Jr. hit an RBI double in the 10th.

Blue Jays slugger George Springer was removed in the eighth inning because of right elbow discomfort. Manager Charlie Montoyo said he thinks Springer will have some tests done.

"(When) he swings and misses, that’s when he feels it," Montoyo said.

Chicago nearly wasted a stellar start by Cease, who matched his career high for strikeouts. The White Sox went 6 for 21 with runners in scoring position and left 14 runners on base.

"A very special win," manager Tony La Russa said. "Starting with Cease and then coming back like we did."

Chicago trailed 4-2 before Robert hit a two-run single off Jordan Romano with two outs in the ninth, delighting the crowd of 20,529 at Guaranteed Rate Field.

After Abreu singled, putting runners on the corners, AJ Pollock hit a liner to center. But Zimmer, who entered as a defensive replacement in the eighth, made a diving grab, sending the game to extra innings.

"That kept us in the game," Montoyo said. "Great play."

Cease was working on a no-hitter before Lourdes Gurriel Jr. led off the sixth with an infield single to shortstop. The right-hander retired his next three batters, striking out Bo Bichette looking on his 101st pitch.

Toronto then went to work against Chicago’s bullpen.

Kirk hit his seventh homer in the seventh against Jimmy Lambert. The Blue Jays grabbed a 4-2 lead with three runs in the eighth, sending nine batters to the plate.

Toronto’s rally got Kevin Gausman off the hook for what would have been a hard-luck loss. The right-hander struck out seven while working six innings of two-run ball.

"Just filling up the zone," Gausman said. "I thought we did a good job of mixing pitches and making adjustments when we needed to."

Blue Jays: LHP Tayler Saucedo (right hip discomfort) made a rehab appearance with Triple-A Buffalo. Saucedo allowed a single and then walked two batters before he was ejected by plate umpire Lew Williams.

White Sox: 3B Yoán Moncada (strained right hamstring) plans to start hitting on the field in the next couple of days. He was placed on the 10-day injured list Monday. "I don’t think it’s anything serious or anything that’s going to take a long time," Moncada said through a translator. "The muscle just kind of strained. It isn’t a bad one. I think I’ll be OK after the IL stint." ... RHP Liam Hendriks (right forearm strain) threw Monday and planned to have another session Tuesday. "Everything is exactly where we are expecting it to be," he said. ... OF Eloy Jiménez (torn hamstring tendon) restarted his rehab at Triple-A Charlotte. Serving as the designated hitter, he went 0 for 4 with two strikeouts.

Right-handers Ross Stripling (3-2, 3.28 ERA) and Lucas Giolito (4-3, 4.78) pitch in the series finale Wednesday afternoon. Stripling is 3-1 with a sparkling 1.04 ERA in four June appearances for Toronto. Giolito was tagged for eight runs and seven hits in five-plus innings during Chicago’s 13-3 loss at Houston on Friday night.