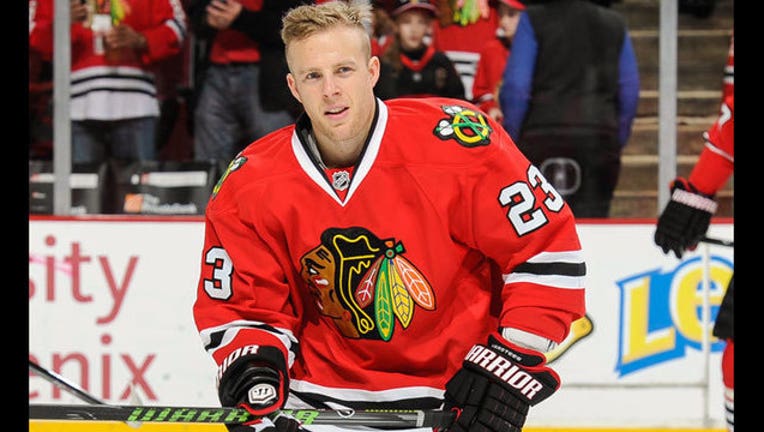 RALEIGH, N.C. (AP) - The Carolina Hurricanes acquired veteran forward Kris Versteeg in a trade with the Chicago Blackhawks on Friday, and the Stanley Cup champions used their new cap space to finalize a one-year contract with key center Marcus Kruger.

The Hurricanes sent defensemen Dennis Robertson and Jake Massie and a fifth-round pick in the 2017 draft to the Blackhawks for Versteeg, forward Joakim Nordstrom and a third-round selection in the 2017 draft.

"Kris is a skilled forward who has won a pair of Cups with the Blackhawks and can provide veteran leadership in our room," Hurricanes general manager Ron Francis said. "Joakim is a solid, 200-foot player who can kill penalties. This gives us more options up front for this season, while also now giving us 10 picks in the first three rounds over the next two drafts."

The 29-year-old Versteeg had 14 goals and 20 assists in 61 games last season. He also helped Chicago win the NHL title in 2010, but the Blackhawks were looking to free up cap space for Kruger's deal.

The Versteeg trade for two minor leaguers and a future draft pick is the latest blow in a difficult offseason for Chicago, which also won the Stanley Cup in 2013. The Blackhawks also traded away Patrick Sharp and Brandon Saad and watched Johnny Oduya, Brad Richards and Antoine Vermette depart in free agency while trying to manage the salary cap.

Training camp begins next Friday at Notre Dame, and it is unclear when star winger Patrick Kane will join the team. Kane is accused of sexually assaulting a woman at his offseason home near Buffalo. No charges have been filed.

The 25-year-old Kruger was selected by Chicago in the fifth round of the 2009 draft and has spent his entire career with the Blackhawks. He had seven goals and 10 assists in 81 games last season.

Versteeg, who made his NHL debut with Chicago in 2007, has 116 goals and 159 assists in 473 career games with the Blackhawks, Maple Leafs, Flyers and Panthers.