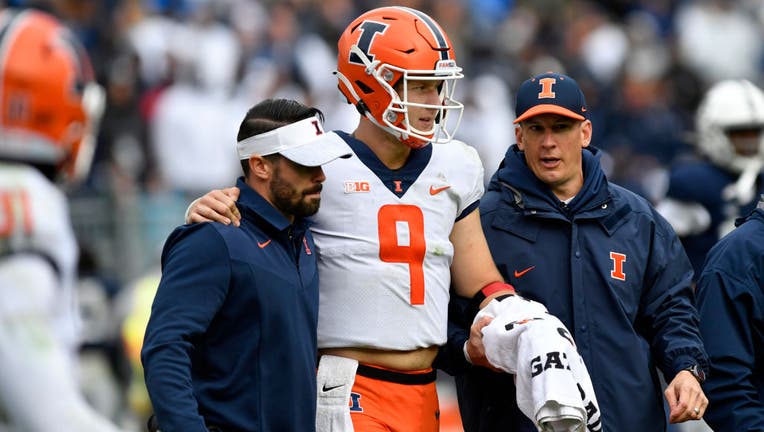 Illinois quarterback Artur Sitkowski (9) leaves the game with medical staff after a left forearm injury during overtime of the Illinois versus Penn State on Oct. 23 at Beaver Stadium in University Park, PA. (Photo by Randy Litzinger/Icon Sportswire v

CHAMPAIGN, Ill. - Illinois quarterback Artur Sitkowski will miss the rest of the season after breaking his left arm against Penn State. Brandon Peters will start the Illini’s home game against Rutgers on Saturday.

Coach Bret Bielema announced Monday that Sitkowski would have surgery on his arm Wednesday and have another operation in two to four weeks to correct a chronic problem in his right shoulder. Bielema said Sitkowski would miss spring practice and should be full strength next fall.

Sitkowski’s arm was broken when he was hit as he threw a rollout pass in the fourth overtime of Illinois’ 20-18 nine-overtime win at Penn State last Saturday.

Sitkowski completed half his passes (74 of 148) for 704 yards and six touchdowns with two interceptions in his five games. The sophomore was in his first year with the Illini after transferring from Rutgers.

He replaced an injured Peters early in the opener against Nebraska and led the Illini to a 30-22 win. Sitkowski started the next two games and backed up Peters the following four.