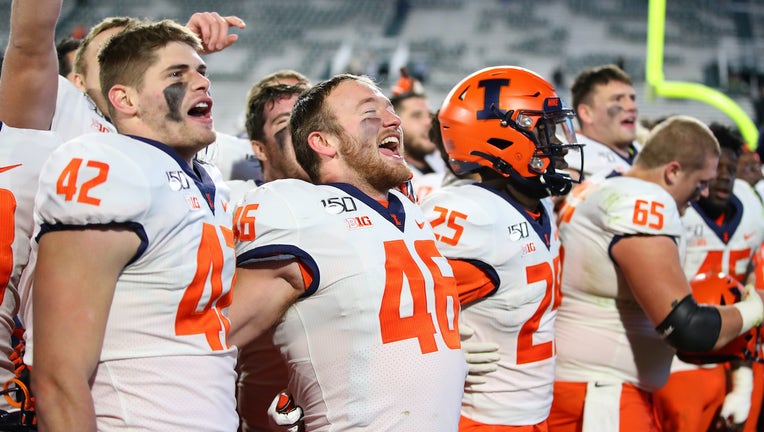 Members of the Illinois Fighting Illini celebrate a 37-34 win against the Michigan State Spartans at Spartan Stadium on November 09, 2019 in East Lansing, Michigan. (Gregory Shamus/Getty Images)

Illinois (6-4, 4-3 Big Ten) trailed 28-3 in the second quarter and 31-10 entering the fourth. Down 34-30, they converted fourth-and-17, then drew a pass interference flag in the end zone on another fourth-down pass. It was second-and-goal when Peters patiently rolled out to his right and found Barker open in the back of the end zone.

The Illini are now bowl eligible for the first time since 2014. They’ve done it by forcing turnovers all season long, including four Saturday.

Down 28-3, Illinois began its comeback when Peters threw a 46-yard touchdown pass to Josh Imatorbhebhe on the final play of the first half. It wasn’t so much a Hail Mary as it was just a long pass to a single-covered receiver deep down the field — the first of several puzzling mistakes by Michigan State. 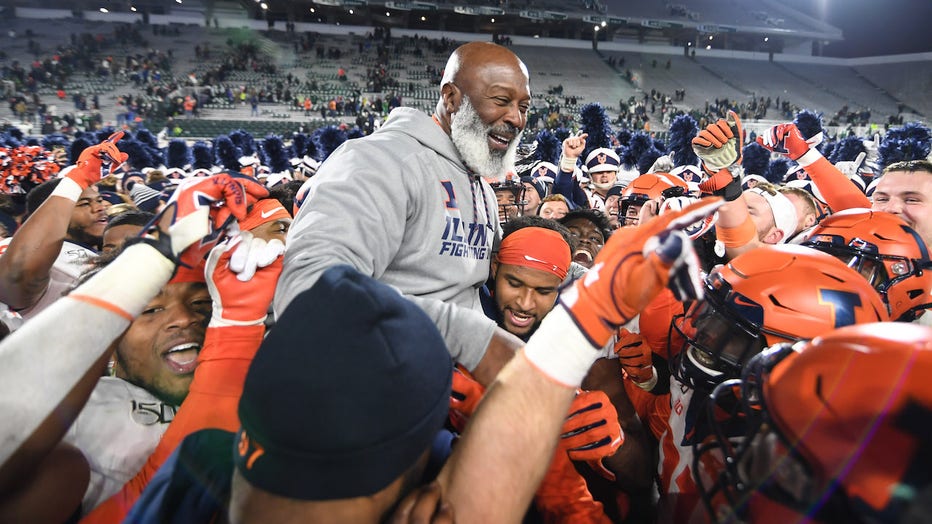 The Spartans (4-5, 2-4) then lost a fumble giving the Illini the ball at the Michigan State 8-yard line. But Peters’ pass to the end zone was intercepted by Shakur Brown.

The reprieve was only temporary for the collapsing Spartans. Brian Lewerke’s third interception of the game was returned 76 yards for a touchdown by Sydney Brown. That would have tied the game, but James McCourt missed the extra point.

Michigan State’s Matt Coghlin kicked a 46-yard field goal with 3:17 remaining to make it 34-30. Peters completed a 37-yard pass to Imatorbhebhe on fourth-and-17, and before long, it was first-and-goal from the 1.

The Spartans forced Illinois into a fourth-down situation from the 4, and Peters’ pass to Caleb Reams fell incomplete. But Reams and Josh Butler got tangled, and the Michigan State defensive back was called for pass interference. The Illini finally scored with 5 seconds left.

Illinois: What a way for the Illini to qualify for a bowl. They’ve now forced 26 turnovers on the season, and that helped them get back in this one. Then Peters, Imatorbhebhe and Barker took it from there.

Michigan State: It was simply an appalling loss for the Spartans, who have now dropped four straight as their season has gone from bad to worse. They turned the ball over and allowed long passes in situations when only a long pass could really hurt them.

Illinois: The Illini are off next weekend before playing at Iowa on Nov. 23.

Michigan State: The Spartans play at rival Michigan on Saturday.

There are 53 teams that are bowl eligible so far: